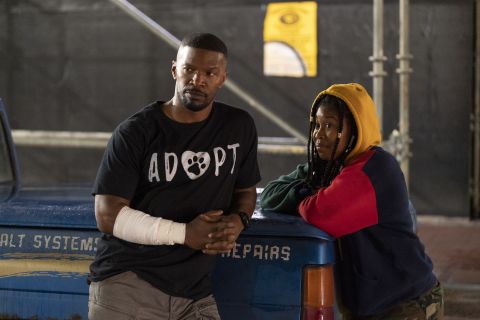 Good performances lift a story too busy with ideas to successfully explore all of them.

Not unlike the experimental pharmaceutical at the center of Project Power, Netflix’s new action thriller offers a broad spectrum of experiences - some really interesting, even exhilarating, and others just explosive and messy. Directors Henry Joost and Nev Schulman (Paranormal Activity 3 and 4, Viral) continue exploring their ongoing fascination with to-the-minute technology through another fantastical, forward-thinking story, this time about a drug that gives users unpredictable powers, and the criminal and political forces aiming to control its distribution. But even solid performances by Jamie Foxx, Joseph Gordon-Levitt and up-and-comer Dominique Fishback can’t quite wrangle unwieldy mess of ideas in Mattson Tomlin’s (co-writer of the upcoming The Batman) script into a more coherent and satisfying trip.

Fishback (The Hate U Give, TV’s The Deuce) plays Robin, a New Orleans teenager who sells an experimental drug named “Power” after school in order to raise money to care for her bedridden mother. After developing a friendship with Joe (Gordon-Levitt, Inception), a local cop who buys Power for performance enhancement - including the ability to stop bullets - during arrests, Robin attracts the attention of Art (Foxx, Just Mercy), a gun-toting vigilante looking for the city’s supplier of the drug. Despite Art’s claim to be searching for his missing daughter, Robin is afraid of him, especially after Joe reaches out with news that he’s a fugitive from the authorities. But when a meeting with her own supplier ends in bloodshed, the young hustler begins to question what she’s been doing, and what she thinks she knows.

Reluctantly teaming up with Art to find the source of the drug even as it’s poised to become a worldwide phenomenon, Robin becomes embroiled in a dangerous conspiracy involving abductions, cartels, and the highest levels of police and government. As their path converges with Joe’s, who himself was mysteriously displaced from investigations that should be the cornerstone of his job, Robin and Art race to uncover the identity - and motive - of the supplier pumping Power into the streets of New Orleans, and save Art’s daughter before it’s too late.

Of the many movies with which Project Power shares probably too much in common, the most unexpected, albeit perhaps telling, is Ang Lee’s 2003 Hulk. Like that underrated but also not altogether successful film, Netflix’s latest hopes to find connective tissue between nature and nurture in unexpected, intriguing ways, married by science that both on screen and in real life feels dubious at best.

Within the world created by Tomlin’s script, some individuals possess latent abilities - a profound enough discovery by itself - while everyone else must use Power to manifest them, triggering any combination of primordial biological elements, from chameleonic invisibility to literally exploding. At the same time, Power seems derived not just from the DNA of one “gifted” person but a cocktail of genetic elements, so it becomes unclear exactly why all of this kidnapping business is even necessary if the technology exists to clone, excise and splice all of these wild powers into a little pill that buzzes like a flashbulb when you switch it on and swallow it.

That said, Foxx makes the most lasting impression as Art, fighting his way through an escalating series of showdowns to find his daughter, and one supposes, resume a normal life where a shadow organization kidnapped his daughter and prevailed upon the local, state and national authorities to do nothing about the crime. He’s best when bantering with Robin, a daughter without a father, but he conveys the most affecting superpower in the movie - the dedication and perseverance to find and care for his child when she most needs him.

Conversely, Gordon-Levitt’s unique and consistent skill of giving roles precisely what they need, no more and no less, accomplishes much here as a cop addicted to drugs that allow him to do his job better but also mistrustful of the figures lurking just beyond the periphery of his pay grade. Together, Foxx and Gordon-Levitt make an interesting father-big brother dynamic that probably could have shepherded this story through its familiar rhythms without even needing the young woman who initially connects them.

To that end, I’m not altogether sold on Robin as a “drug dealer with a heart of gold” - no matter what relationship has evolved between her and Joe to make him give her a motorbike for her birthday (or even to know what her birthday is) - but Fishback is definitely convincing as a high school teenager whose own latent ability is her artistic potential. As a matter of geographical accuracy for New Orleans, or simply narrative inclusion, it’s great to see a young woman of color as an instrumental component of the plot. But the movie never quite learns how to reconcile making her both a criminal funneling drugs into low-income communities and also a really terrific person whose potential hasn’t been sufficiently nurtured. Or, simply to satisfy the machinery of the story’s mythology, how she’s become a successful drug dealer with virtually no material connection to anyone else in a distribution platform until the events of this movie.

Again, it’s these contradictions and the overall surplus of ideas that drag down what could have been a more straightforward, heartfelt thriller. Wrestling with the moral repercussions of having super powers is an interesting, under-explored idea, for example, but Joe’s quandary doesn’t fill that gap. The movie seems more keen to prey for drama on familiar and relevant ideas of poverty-stricken communities serving as a training ground and laboratory for corporate greed than to really wrestle with those ideas; they mostly offer dilapidated backdrops for action sequences. All of which is why ultimately, Project Power isn’t without some good ideas, and some terrific moments of action and energy, but as social commentary, substantial action filmmaking or something truly heartfelt, Joost and Schulman offer a rush that feels too uneven, and fades far too quickly.