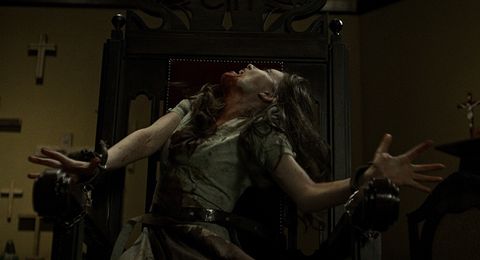 'The Cleansing Hour' exorcises an overdone horror subgenre of its staleness in an exceptionally entertaining spectacle of profiteering prophets and merciless hoofed tormentors.

Horror’s implementation of possessions is routinely repetitive, men of cloth chanting rites at camouflaged ghouls, and vlogger culture genre riffs? I’m just not particularly interested in how many titles depict fame-seeking egomaniacs who dare monetize the darkest unknowns. “Aren’t we here for a review of The Cleansing Hour?” Indeed, my patient reader! A film that has shown me the light regarding both subgenre tracks; terrifically terrifying and antagonistically compelling.

Ryan Guzman stars as Father Max Tyler, a worshipped social media savior whose weekly interrogations of the damned are staged productions. Actors, rigged effects, the works. Max’s childhood friend Drew (Kyle Gallner) orchestrates from behind a control panel, until one episode changes everything. When Max's latest “victim” ghosts their call time, Drew begs his fiancée Lane (Alix Angelis) to stand-in as a last-minute replacement. She does, except tonight’s encounter brings “Maxy” face-to-face with his first real demon. Lane’s possessed by an unknown force, her soul trapped unless Max and Drew can figure out the demon’s endgame while cameras livestream the horrific special event.

Damien LeVeck and co-writer Aaron Horwitz channel a heavenly satire proficient in stellar Halloween vibes. Horror that’s never overly complicated, yet thrilling and energetic as false prophet Father Max is ridiculed on internet channels as a fraud. After some quick groundwork is laid to establish him as the playboy follower-seeker without much of a moral compass, it’s right into torments conjured by Lane’s unannounced passenger. The more devious and defiant Max’s foe becomes, the more delicious their blasphemous chemistry enriches. Good versus evil, but in a way that’s ambiguous as to who is the righteous one as Max's and Drew’s sins are confessed.

The Cleansing Hour summons everything horror fans should desire. LeVeck wastes no time waging a holy war and bursting the internet’s reality bubble in synchrony, all while supporting characters are incinerated, slashed apart, and strangled with signal-transmitting cables. Effects are a mix of digital and practical, throwing these insane scenarios at Father Max’s team like a forced striptease “Hokey Pokey” dance of death or minion hellhound creatures only Drew’s tripping-balls crew assistant can see. LeVeck keeps hurling more and more genre curveballs our way from Lane’s disfigurements, to official “Vatican Approved” (lol) fabrics pulled from orifices, to fully-costumed representations of evil. All while viewers are asked to participate in the festivities, as Lane cackles while chatbox avatars submit orders or frantically throw heart icon likes in last-ditch saving efforts.

Powerful performances are the basis of fear, especially the critical triumvirate of Ryan Guzman, Kyle Gallner, and Alix Angelis. Guzman leads the show as the priest persona who beds groupies after karaoke serenades then cowers in prayer-pose before an actual demonic entity that shatters his faux celebrity image. Kyle Gallner watches helplessly from the sidelines as Guzman’s “man in the chair,” effectively conveying the franticness of their ungodly situation while deciphering their rival’s puzzle (so infectiously expressive). Then there’s Angelis, who spends far more time convincing audiences she’s possessed by one of the devil’s henchmen through an expert-level possession portrayal. These actors bring their paranoias to life, react off one another’s urgency, and skewer stardom cliches when actual stakes are amplified to unfathomable degrees.

Who doesn’t love satanic pageantry where performative liars must reap what they sow? The Cleansing Hour has one of those narratives that’s like, “Well, you played with an Ouija board, what do you expect?” Except this one boasts sexpot Jesus-lookin’ Ryan Guzman, a grab-bag of spooky environmental accents, and further performance standouts that ensure viewers remain locked into every layer of exposed deception. Some animation SFX stand out when compared to the more gruesome physical makeup, truth. Also, Max and Drew’s church-education backstory lacks a bit of contextual oomph. But the energies of the actors enduring such pains are enough to keep attention from waning. Damien LeVeck? You’ve united two subgenres that I mightily struggle with, and yet I stand before y’all a believer. For that, I’ll smash that subscribe button to appease Father Max Tyler, patron saint of bullshit and hypocrisy.