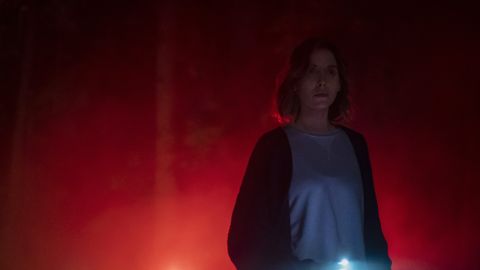 It's certainly a renter's ultimate nightmare, but unfortunately not one that lingers far past the end credits scroll.

The Rental, which marks Dave Franco’s directorial debut, cuts into the often-ignored paranoia that comes with services like Airbnb. We live in a time where convenience trumps rationale, and old warnings against trusting strangers no longer carry weight. Sure, startup companies and apps vet real estate listings as best they can, but what stops a psychopath from masquerading as an entrepreneur?

Franco, alongside co-writers Joe Swanberg and Mike Demski, reminds us how easy it is to manipulate systems hinged on collective decency. The question becomes whether these modernized narrative hooks dig deep enough into an otherwise unoriginal setup.

Two brothers and their significant others rent a luxury coastal vacation home for the weekend. Charlie (Dan Stevens) and Mina (Sheila Vand) are business partners, not lovers, who intend to celebrate their latest venture’s success. Josh (Jeremy Allen White) and Michelle (Alison Brie) are along for the ride, happy to praise their partners’ accomplishments. The quartet arrives and is greeted by the estate’s manager, Taylor (Toby Huss), who isn’t the warmest greeter and also might be a wee bit racist. Nevertheless, friends and lovers lose themselves to booze and pills as a momentary escape — but just when their guards are let down, surveillance cameras hidden inside shower heads suggest their weekend retreat might include an unwanted guest.

There’s voyeurism with spiked heart rates throughout The Rental. Taylor’s introduction as a “groundskeeper” type who comes and goes as he pleases — while Charlie’s crew drinks away nights into hungover mornings — is meant to unsettle.

Airbnb has normalized a business model where renters enter someone else’s domain and are assured “privacy,” but there’s nothing stopping owners from dropping in for a visit (motivations unknown). We’ve seen this scenario repeatedly through home-invasion scripts over past decades, but it’s no less unnerving. Franco captures cautionary relevance, dating back even to the Craigslist Killer in terms of predatory online users. Franco’s directed mood is “constantly unsafe,” and simmering hints of dread singe the audience every so often.

On the flip side, we’re introduced to characters who entangle themselves in ways that some may find frustrating at best. Franco’s navigation of watch-while-you-sleep horrors does not equal the dramatic unfoldings between tightknit companions who act on their worst impulses. Charlie feels more terrorized by his choices than any slasher figure, which is never really hidden. It’s not to say Dan Stevens or Sheila Vand or anyone in the cast gives a poor performance, but more how the film wrestles with negating law enforcement involvement for such selfish reasons. I found myself far more transfixed on the film’s handling of thoughtlessly inhabiting someone else’s space without question. Less affected and interested in watching ex-criminal Josh act predictably out of aggression or Michelle’s naivety proving to be a damning quality.

None of this detracts from The Rental’s inherent creepiness. Cinematographer Christian Sprenger rolls fog over bubbling jacuzzi waters with this atmospheric thickness in terms of ominous visual cues. The film’s darkened backdrops might hinder visibility, but they do assert a sense of isolation as nightfall brings no added brightness from populated civilized areas. These technical aspects are confident, and that’s a testament to Franco as a first-timer.

What hurts the overall production is another character decision that’ll cause dissension yet is permitted to happen for this exact obvious reason. Environmental distractions allow for a third act that wraps up in a rather quick fashion and downplays an even bigger message about people who act as they do, and why. (Sorry for the vagueness, but it’s with spoiler avoidance in mind.) Overdramatic plotting is purposeful, but that doesn’t mean it works as intended.

Dave Franco’s first foray into horror filmmaking is a mixed-bag that shows heaps of promise and will crawl under the skin of easily susceptible home-based horror appreciators. The Rental works as a simplistic “Peeping Tom” riff, but the unfortunate reality is there’s far more going on with less intriguing results. It’s a stacked cast spiraling hard as their characters fall victim to projected insecurities and habits, as “nice guy” facades melt away when true colors shine through — but these moments weaken otherwise genuine The Strangers bred terror. A genre film that executes as it thinks a genre film should, which might be enough for some who’re keen on only payoffs. Alas, buildups leave me craving less expected “twists” and fearing more than the act of self-preservation for the wrong reasons.

The Rental will be available to rent and in select drive-ins on July 24, 2020.