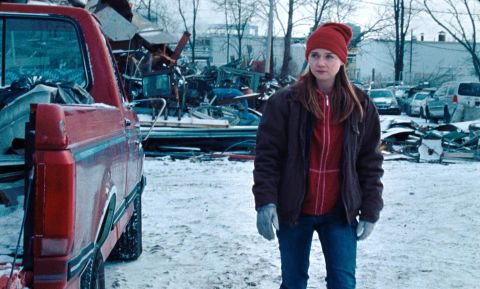 Nicole Riegel's feature directorial debut Holler is an impressive drama about the cycle of poverty in modern-day America.

Plenty of films are selling themselves as being “of the moment” or commentaries on our tumultuous times, especially as we enter the final stage of an election year. Holler, the feature directorial debut of Nicole Riegel (based on her own short film), announces its intentions right out the gate when its two protagonists flee the dirty aisles where they have stolen some trash bags full of tin cans, only to turn on the radio of their battered truck and hear the all-too-familiar voice of Donald Trump bragging about all the jobs he’s bringing back to their home state of Ohio. Jobs are great and all that, but what if, as is the case for millions of people, that work doesn’t pay enough for one to survive?

Holler centers on Ruth (Jessica Barden) and her older brother Blaze (Gus Halper), who try to live their day-to-day lives while in the ceaseless grip of poverty. Ruth is trying to graduate from high school while her dropout brother works at a ready-meal factory, one of the few employers left in the area. They steal garbage to recycle for extra cents, their fellow factory workers give them reject frozen dinners from the assembly line to eat, and they boil water on the stove to wash their hands because the utilities have been cut off. This is a life devoid of glamour, of hope, and of real escape options. With eviction notices littering their door and Blaze determined to make sure Ruth gets to college, the pair take a less-than-legal job scavenging the abandoned mills of their area for scrap metal.

Reviews have been quick to note the comparisons between Holler and Winter’s Bone, Debra Granik’s acclaimed exploration of an American family in poverty fighting with everything they have just to survive. Like that film, Holler keenly captures the desperation of life below the breadline: The well-worn clothes that are either too big or too small; the stolen library books on Ruth’s desk; the ways that the characters seem to be constantly hiding just how unprotected from the cold they are, as if they’ve been doing it all their lives. And this is a cold place, not just because of the blankets of snow covering everything but thanks to the endless landscapes of metal that surround Ruth and Blaze, be it the mangled towers in the scrapheap or the ruthless efficiency of the factory machinery.

Like Winter’s Bone, Holler also has a stalwart leading performance that seems tailor-made to announce a new star to the world. Jessica Barden, the British actress perhaps best-known for Netflix’s The End of the F**king World, is this movie’s not-so-secret weapon. She has the perfect face for Ruth’s weary despair, capturing the beyond-her-years wisdom that unfortunately accompanies a life of poverty. Ruth seems so much older and embittered until she talks, revealing how youthful she truly is, but she doesn’t talk much. Barden doesn’t need to talk much to fully convey this character’s cynicism. She has wearily accepted the crushing reality of her life, and she even seems ambivalent about the crimes she commits, but her spark hasn’t been diminished.

Sometimes, it feels like Holler doesn’t trust itself to tell its story, which may explain the ill-fitting choice of a strings-heavy score that seems designed to make the audience cry. The movie is effective enough without it thanks to its cast and Riegel’s own keen understanding of poverty. Being poor is expensive and its smothering limitations force you into a vicious cycle: You skip school to make money so you don’t graduate; the jobs disappear from the area so you risk it with illegal work, which could send you to prison and make you even more unemployable; even the teachers try to discourage you from aiming higher because your “situation” makes such ambitions untenable. With hand-held cameras and foreboding dark cinematography, Holler captures the claustrophobia of this cruel system, trapping the viewer as much as Ruth and Blaze. This is a movie that is at its most gripping and efficient when it’s as stark as it can get.

Holler will inevitably become a strong calling card for its undoubtedly talented director. It’s a remarkably self-assured feature debut that lays out its goals and accomplishes them with true force.

Holler is playing as part of the 2020 Toronto International Film Festival, which runs from September 10 to 19.