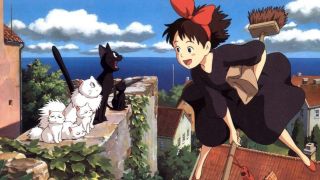 Kiki rides a broomstick over a city looking a group of cats in Kiki's Delivery Service. (Image credit: G Kids)

We love witches all year round, but now that spooky season is officially upon us there is no better time to dive into some wonderful witchy movies. While there are plenty of horror films centering magical practitioners, they are not on this list. This selection has been curated to encourage cozy feelings while you sip on a warm beverage and curl up under a blanket. But never fear, that's not to say there won't be a few scares coming your way as there are still some legitimately fearsome movies here, likely a couple that gave you nightmares as a kid. So without further ado summon your familiar, pull up something comfy to recline on, and enjoy.

This lesser seen direct sequel to The Wizard of Oz is a stone cold spooky classic. Fairuza Balk stars as Dorothy who has been sent to a mental asylum because of her tales about her adventures in the first movie. Just as she's about to undergo electric shock therapy--really--she escapes with a chicken and ends up back in Oz. That's where an evil queen who collects decapitated heads reigns, everyone she once knew has been turned to stone, and the monstrous wheelers run riot. It's a truly scary movie that was locked in the vault for years but has finally been unleashed.

Studio Ghibli movies are wonderful any time of the year but it's hard to beat this sweet witch story for a great Fall watch. When Kiki leaves home for the big city she finds friendship, fun, and lots of really cool women. A coming of age story that will make anyone feel like a big kid, Kiki is a heroine for the ages as she flies around on her broomstick delivering all kinds of magical baked goods. Plus, just like most Ghibli movies, there's some deeper messages folded in about the value of labor, the pursuit of art, and the danger of creative burnout.

Music video director Tarsem Singh made waves with his movies The Cell and The Fall. While Mirror Mirror isn't as weird, scary, and wonderful as those, it is a stylishly and delightful romp. Taking on the classic Brothers Grimm fairytale Snow White, Singh's vision brings outrageously camp costuming and Julia Roberts as the evil queen. What more could you want? This is a saccharine take on the often grim story which often feels like the visual equivalent of feasting on the most decadent of baked goods, a sort of French patisserie for the eyes. Delicious!

2020 definitely needs more Nazi-hunting witches and this groundbreaking animated/live action mashup features Angela Lansbury as just that. The Hollywood icon stars a witch who gets entangled with the lives of two children who come to stay with her during World War II. Though at first she's less than pleased, the trio soon end up on a series of magical adventures that will fuel your imagination. Plus, it's a classic Disney movie so it has a ton of really great songs!

Mary and the Witch's Flower

This spectacular animated movie is one of the best to come out in the last few years and fits perfectly into your spooky Fall viewing. When Mary is sent to live with her aunt and await the arrival of her parents, she finds herself terribly bored despite the idyllic scenery. That all changes when she follows two cats into a nearby forest and discovers a secret school for magic. Beautifully animated, this is an awesome adventure full of heart and wonderful witches.

The second Studio Ghibli entry onto our list, this smash-hit movie is a must watch. Chihiro is less than pleased when her parents make her move away from all of her friends and even more upset when they make an unexpected stop to eat some strange food and get turned into pigs. Their daughter quickly becomes their only savior, blurring the lines between the mortal and spirit worlds in order to protect the people she loves. The world of Spirited Away is filled with mythical spirits, dragons, and witches... basically everything you need for a good Halloween watch!

Disney's scariest animated movie by a mile, The Black Cauldron is nothing short of brilliant. A pig herder, Taran, dreams of becoming a knight and must fight the demonic Horned King who wants to secure the powerful cooking vessel so that he can take over the world. Released in 1985, the movie was the most expensive animated film ever at the time, but it didn't make a profit and Disney kept it in the vault with no home video release until 1998. Luckily, it's now available on Disney+ so you can watch this surprisingly scary and experimental movie as much as you want.

Where to watch: Disney+

Based on Neil Gaiman's novel of the same name, this British fantasy film has built a passionate fanbase in the years since its release. Tristan Thorn (Charlie Cox) is a young farm boy who has no idea his mother was a witch. But when he rescues a fallen star (Claire Danes) and has to help her get home, he finds himself in a mythical world where anything is possible and maybe even true love. This cute flick also features three of the best cinematic witches ever with Michelle Pfeiffer leading the trio who want nothing more than to eat the fallen star.

Where to watch: Netflix

Disney+ has been great for those of us who enjoy the stranger offerings from the company's catalog. Willow fits that bill perfectly as George Lucas leaned into hard fantasy and crafted a leading role for his Ewok star, Warwick Davis. Playing the titular hero, Davis is a charming lead who has to protect a baby who may or may not be the key to saving the world. He can't do it alone, though, and teams up with Val Kilmer in a truly wild role as the useless rogue Mad Martigan. This is a super fun nostalgic trip that features one of the best evil queens and heroic knights of all cinematic history.

I am a latecomer to loving this dark and delightful celebration of sisterhood and magic, but I am a huge fan. Nicole Kidman and Sandra Bullock star as sisters from a family of witches who are cursed to lose the men they love as soon as they find happiness. It may sound twee or a little depressing, but it's a radical romp that features a revenge killing B-plot, resurrection, and a frozen margarita dance sequence you'll never forget. Basically, it's the perfect Fall movie.