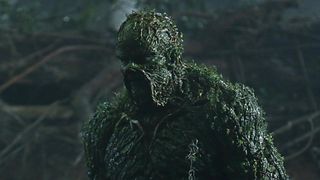 A green veined monster looms towards the camera, it's The Swamp Thing! (Image credit: Warner Bros., The CW)

DC's strange elemental plant creature seems to be rising from the bayous of Louisiana - and the proverbial ashes of cancellation - with a successful debut on The CW. According to TV Line, "Swamp Thing (1.1 mil/0.2) gave the network's 8 o'clock hour its largest audience since May 19 (DC's Stargirl), and the 90-minute period its best audience since Feb. 4." The most exciting thing about that particular bit of data is that Stargirl was (rightfully) seen as a big success for The CW and was recently renewed for an exclusive second season at the Warner Bros. owned broadcast network, which means we could see something similar for the James Wan produced gothic romance series which originally aired on DC Universe.

Based on the character created by Len Wein and Bernie Wrighton - but mostly taken from Alan Moore, Stephen Bissette, and John Totleben's cult classic comic book run -the show was lauded on its original release for its stunning world building, great cast, and impressive use of practical effects. It currently sits pretty at 94% on Rotten Tomatoes, but the series was canceled after just one episode on DC Universe, apparently due to the head honchos at WB being convinced that the show would inevitably flop when it hit the service. That call was wrong according to critics and fans, but the show's fate was sealed and the saga of Swamp Thing was over. At least, it seemed that way until the COVID-19 crisis wiped out most of this year's planned Fall season, causing The CW to pick up the already completed 10 episode series to air.

Many fans were hoping that the second chance might also lead to a second season, and after the feature-length first episode became a big ratings hit for the channel there's more hope than ever that could happen. Like we mentioned before, The CW recently picked up another DC Universe original, Stargirl, which had similar ratings to Swamp Thing and both seem to fill a void that The CW viewers are missing. There's clearly a hunger for superhero-themed shows, and with the regular CW Arrowverse delayed until next year because of COVID-19, these two lesser known heroes have swept in and apparently saved the day for the network.

Compared to Stargirl, Swamp Thing is at a bit of a disadvantage when it comes to being picked up as part of the decision to cancel the show was allegedly connected to whether or not they wanted to keep the show's massive practical sets in storage, and the answer was sadly no. That doesn't mean it's over, though, as Stargirl shot in Atlanta but will be moving to Vancouver to join the other The CW shows. That means there's clearly scope to rebuild sets, in which case why shouldn't Swamp Thing join them?

The landscape for horror and genre programming has shifted so much in even just a year. Watchmen swept the Emmys, Lovecraft Country was another huge critical success; away from HBO and the obvious prestige landscape, CBS' exorcist procedural Evil was a massive hit, not just on the network but also in its current second release window on Netflix. Speaking of that streamer, its recent acquisition of the first three seasons of NBC's beloved Hannibal has once again sparked conversations about a renewal for that cult hit. Basically, there's a hunger for thoughtful horror with an inventive twist, making Swamp Thing a potential coup for The CW.

The series feels even more timely than when it launched last year, not just because it centers around a woman trying to find a cure for a deadly virus but also because it's a thoughtful inventive horror series with a diverse cast and writing that respects its audience. It has vibrant horror talent behind the scenes with James Wan, Mark Verhieden, Gary Dauberman, and Len Wiseman all involved in the first season. A potential renewal on The CW could expand that even more, bringing brilliant female horror writers and directors into the pool. Tananarive Due, Misha Green, Karyn Kusama, Cheryl Dunye, Janet Mock, Sarah Polley, Victoria Mahoney are just a sample of some of the incredible creators who come to mind that could shape the wider world of Swamp Thing. It's a female-centered series with Crystal Reed, Virginia Madsen, and Maria Sten at its center, so why not bring in more women behind the camera to enhance that vision and those stories going forward?

So what could those stories be? Well, like most series, Swamp Thing was made with the intention of continuing past its first season, which means it seeded a lot to grow. Not only did they introduce a mass of deep cut DC Characters--including Madame Xanadu, who we met in the first episode--that hinted at the introduction of Justice League Dark, but Abby herself is connected to one of the greatest DC villains of all time, Anton Arcane. While he never makes an appearance in the first season, there was plenty of space to build on the man who was once Swamp Thing's greatest foe. There are decades of stories to take from that feature the villain as well as, of course, building on the relationship between Swamp Thing and Abby. If the series is picked up by The CW it would be interesting to see whether they'd be interested in connecting it to the rest of their stories, especially as the titular plant elemental has a deep connection to one of the channel's most popular characters, John Constantine.

Plucked from his titular canceled NBC series, Matt Ryan's bisexual demonologist has become a huge hit as a part of the wild and wonderful Legends of Tomorrow. In the comics, the trenchcoat wearing anti-hero often teams up with the magical plant elemental, and if the previously announced HBO Max show is happening, having a Swamp Thing series on air makes sense. There is always the other option, too. If WB is enticed by Swamp Thing's success but The CW doesn't have space on its packed slate, it could be moved to HBO Max and once again be given free reign when it comes to horror, experimentation, and the strange romance between a plant monster and his loving human partner. The third option might be the most likely, though, which would see Swamp Thing, possibly Abby, and other characters we met here plucked from the success of Swamp Thing and supplanted in the world of the wider CW. Legends of Tomorrow would be an easy place to introduce the characters if WB isn't ready to commit to a full season renewal.

All of this is to say don't give up hope, swamp dwellers! As with the news of the strong ratings and an ever-shifting TV schedule due to COVID-19, the little superhero horror show that could, Swamp Thing, might get that proper second chance after all.