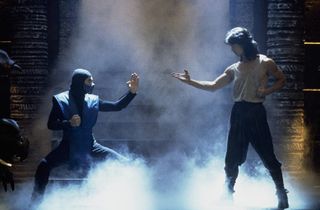 We are almost a decade removed from conversations about “vulgar auteurism,” a thread of film criticism that sought redemption for blockbuster filmmakers. No single name fits the bill quite as well as Paul W.S. Anderson. Architect of the Resident Evil series to some, destroyer of the Mortal Kombat and Alien vs. Predator franchises to others, Anderson remains one of the more contentious names in blockbuster cinema. Even now, Anderson holds the reins of major Hollywood franchises - the upcoming Monster Hunter, starring real-life spouse Milla Jovovich, only adds to his clout (and endearing “wife guy” energy).

But before Anderson was an offshoot of French film theory, he was a young filmmaker looking to make his stamp in Hollywood with a high-profile video game adaptation. In 1995, Anderson began his career-long fascination with Mortal Kombat, the live-action adaptation of Midway’s infamous arcade fighter. Adapting the game’s premise of a group of ultimate warriors battling for the future of humanity, Mortal Kombat occupies a unique niche in Hollywood history – and Anderson’s fascinating and frustrating career.

In 1995, no video game was more infamous than Mortal Kombat. The original game, released in 1993, had sold over three million copies worldwide. Its shocking “fatalities” – the virtuosic eliminations players could trigger at the end of a fight – created such a cultural panic that Congress made them the focal point of a series of hearings on video games and violence. “We’re talking about video games that glorify violence and teach children to enjoy inflicting the most gruesome forms of cruelty imaginable,” Democratic senator Joseph Lieberman announced. As a result of these 1993 hearings, the video game rating system was adopted.

This kind of controversy promised video game fans something truly outrageous. Instead, audiences received a film with blunted edges. New Line Cinema was determined to launch a franchise; the film even spawned a tie-in touring production called “Mortal Kombat – The Live Tour,” which opened at City Music Hall in September of that year. Out of the gate, the brutality of Mortal Kombat was removed, leaving an adaptation of the world’s most violent video game to flounder under a PG-13 rating. While the film does feature an abundance of fight scenes, the onscreen violence has been thoroughly sanitized, with only a few performance drops of blood left to deliver on the promise of the games.

Part of what makes Mortal Kombat such a frustrating film is its strict adherence to the original property. By treating the game’s introductions and ending sequences as faithfully as possible, Kevin Droney’s script does its best to combine a mishmash of storylines – a series of disjointed narratives that justify distinct character models – and recreate them onscreen. It’s the kind of dense sci-fi/fantasy hybrid that might’ve worked with a more talented cast – plenty of veteran character actors have a knack for selling the absurd onscreen – but it is not long before Mortal Kombat feels like a string of exposition periodically interrupted by disappointing fight sequences.

This is despite the preponderance of skilled martial artists in the film’s cast. Star Robin Shou, in particular, was an accomplished Wushu fighter and even personally choreographed some of the film’s fight sequences. Veteran Hollywood villain Cary-Hiroyuki Tagawa created a unique system of martial arts called Chun-Shin that would allow fighters to tap into the “energy of the art.” On paper, the group of performers – proficient in stunts and capable as actors – should have made Mortal Kombat the rare mainstream martial arts film. It is only when the film strips away the secondary characters and focuses on Liu Kang and Shang Tsung that it manages to deliver on its promise of excellent fight choreography.

Based on this, one might argue that Anderson was not the right director for such a stunt-heavy production. Shopping, Anderson’s 1994 directorial debut, may have served as an adrenaline-fueled exploration of youth culture, but the film primarily works as an urban drama on the generational wealth divide spurred by ‘80s-era consumerism. Jude Law’s Billy navigates the ruins of industrial London, driving cars into overpriced shops as an act of rebellion against a middle-class that has written off his future generation. More Trainspotting than Street Fighter, Anderson’s debut was a product of youthful disillusionment, not a film pandering to its violent delights.

But take a long, hard look at Shopping and, even then, it’s easy to see what the director brought to the screen. Anderson has created a version of London that feels almost post-apocalyptic, with Greek-themed shopping centers serving as a luxurious counterpoint to the rubble occupied by Billy and his friends. Call it production design or, in a nod to video games, level design, but Anderson demonstrates an innate understanding of how setting drives spectacle. The physical environments that Billy and his friends inhabit are often stunning, and it was that eye for grandeur that no-doubt sent Mortal Kombat’s producers knocking on his door.

In contemporary interviews, Anderson described Mortal Kombat as something of a cross between “Jason and the Argonauts and The Crow,” and this description is almost scarily accurate. Oscillating wildly between goofy and self-serious Christopher Lambert and the Tagawa seem particularly dialed into the film’s camp potential – Mortal Kombat is neither as good as its fans would have you believe nor as bad as it detractors have suggested. Like Jason and the Argonauts, it’s steeped in ridiculous mythology and ambitious special effects. Like The Crow, it strives for and occasionally achieves a fantastical punk-rock dystopia.

And while one can and should knock Mortal Kombat for many things, the film has a clear and coherent idea of how its setting should inform each tournament battle. Take the mid-movie rumble between Johnny Cage and Scorpion. From the fight in the woods to the hellish graveyard the two combatants tumble into, Anderson and company spend a great deal of time and energy creating unique backdrops for their action. Anderson has always been a filmmaker who loves his set-pieces. The design work of Mortal Kombat serves as a precursor to what Anderson would accomplish in Event Horizon, Resident Evil, and beyond.

Looking back, Mortal Kombat is a perfect precursor for things to come. For all the criticism levied at his films, few filmmakers can match Anderson for his production design; there are moments in later movies like Pompeii and The Three Musketeers that delight in their sense of scope and scale. But as is so often the case in his body of work, Anderson is at his best when his films move at their slowest. His films are often edited at a frenetic pace – Mortal Kombat no exception – and the audience is rarely given the breathing room to stop and appreciate what Anderson does well. All of this may have earned him the title of vulgar auteurist, but it also makes him and Mortal Kombat inexorably linked: madcap and maddening in equal measure.