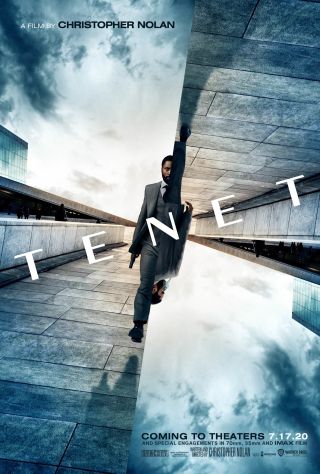 In Inception , director Christopher Nolan challenged our perceptions of reality. In Interstellar , it was about time and space. With Memento , he presented the entire damn story backwards. And with the latest trailer for the upcoming Tenet , it looks as if we might get all three of those things combined.

The trailer is quite the trip. John David Washington ( Ballers, *BlacKKKlansman ) is some sort of spy who "chose to die instead of giving up your colleagues." Only, he's not dead. The question is how. And why. But mostly how.

"You have to start looking at the world in a new way," he's told. And that way, it seems, is backward. Or forward, but in reverse. Or something like that. It's not even about stopping amagheddon, apparently — it's "something much worse."

And that something much worse apparently comes in the form of a Russian who can communicate with the future. Not like time travel, though, Washington tells Robert Pattinson's character. "Inversion."

Think, perhaps, those three movies mentioned above —  Inception , Interstellar and Memento — only with even more James Bond thrown in.

The final seconds of the trailer says that it's still very much coming to theaters, though at this point we still have no idea just when that might actually happen. And it'd be a shame if it couldn't. Dunkirk and Inception are two that absolutely should have been seen on the big screen.

Same goes for this one.