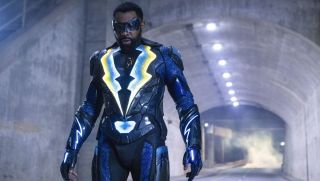 DC FanDome's Black Lightning panel worked a little bit differently than some of the other CW shows, but that doesn't mean it didn't bring anything to the table. Series stars Cress Williams, China Anne McClain, Nafessa Williams, Christine Adams, Marvin “Krondon” Jones III, Jordan Calloway and James Remar were joined by moderator Robert Townsend to pay homage to the 90s.

Topics included television shows like Living Single and Family Matters, films such as Boomerang, House Party and Blade, the Chicago Bulls domination of the NBA, and rap artists. Bottom line? You could tell the cast was having a hell of a time.

Here's some tidbits they dropped in the panel: