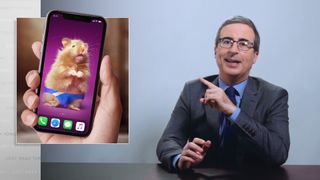 HBO today announced that it's renewed Last Week Tonight With John Oliver for three more seasons. That means at least three more seasons of our favorite British important (sorry, Gordon Ramsay!) recapping the news and adding some much-needed context as only he can.

It means more poignant discussion about topics that generally don't get the tone and texture they truly deserve.

“For the past seven years, John and his incredibly talented team have taken on topics that are both in the public mind and off the beaten path, always managing to shed new light on these subjects with intelligence and searing humor,” Casey Bloys, Chief Content Officer for HBO and HBO Max, said in a press release. “We are beyond thrilled to continue this relationship for three more years.”

The new deal keeps Last Week Tonight on HBO through 2023.

“We’re all extremely happy to be able to continue to do our show on HBO for another three years, or until the end of the world, whichever comes first,” said Oliver.

The show is on break until Sept. 7, when it will return on HBO and HBO Max on Sundays at 11 p.m. Eastern.