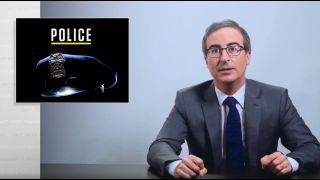 Pretty much the last thing anybody needs this week is another white man explaining the importance of fighting against police brutality.

But the in the case of John Oliver, we'll make an exception.

The entire June 7 episode of Last Week Tonight is available to watch for free on YouTube . And as you'd expect (demand, maybe), they dedicated the entire episode to the events of the past week or so in America.

The gist, if you need it, is this:

As nationwide protests over the deaths of George Floyd and Breonna Taylor are met with police brutality, John Oliver discusses how the histories of policing and white supremacy are intertwined, the roadblocks to fixing things, and some potential paths forward.

Last Week Tonight is the weekly news show from the former Daily Show correspondent that airs Sunday evenings on HBO. The show paused recording in its bigger studio and has moved to the work-from-home version which in many ways remains the same — particularly the writing and wit — though it definitely has a smaller feel.

But as Oliver and Co. proved yet again this week with maybe the most important topic of the show's history, losing the audience doesn't mean losing the intelligence.