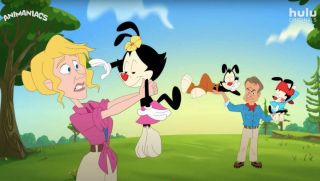 The Animaniacs are back with a special Jurassic Park promo. (Image credit: Hulu)

None of us can attend Comic-Con, but that can't stop the trailers! NYCC debuted Hulu's first new look at their Animaniacs revival, and we're seeing more familiar faces than just Wakko, Yakko and Dot! You've already seen Jurassic Park's Alan and Ellie in the header image, but let's take a look at the full trailer.

Of course, we're all thrilled to know that The Animaniacs will be making a return. But what makes this teaser extra exciting is the confirmation that we'll be getting more Pinky and the Brain in addition to the return of the ever-delightful Warner Brothers (and sister).

Here's the full description of the revival:
Hulu, Amblin Television, and Warner Bros. Animation are proud to unveil a brand-new version of the iconic family-friendly cartoon series for the whole family, as the Warner siblings, Yakko and Wakko, and the Warner sister Dot, have a great time wreaking havoc and mayhem in the lives of everyone they meet. After returning to their beloved home, the Warner Bros. Water Tower, the Animaniacs waste no time in causing chaos and comic confusion as they run loose through the studio and beyond, turning the world into their personal playground. Joining Yakko, Wakko, and Dot, fan-favorite characters Pinky and the Brain will also return to continue their quest for world domination in each of the 13 episodes.