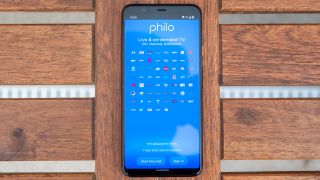 Philo — the $20-a-month streaming service — announced today that it now supports Chromecast via its Android app.

It's not like Philo hasn't been available on all sorts of platforms, but that'll make it easier for those who didn't already have Philo on some sort of streaming device to watch on a larger screen — and Chromecast support is just one of those basic features that Philo had been lacking.

Philo current works in web browsers, on iPhones and iPads, on Android phones and tablets, on on Android TV, Roku, Apple TV and Amazon Fire TV. Where Chromecast will really come in handy is for situations like using a Vizio TV without any other streaming devices attached. In other words, it's a great backup method.

“Chromecast support has been one of our most requested features, allowing subscribers to play Philo content on television screens," Andrew McCollum, CEO of Philo, said in a press release. "We wanted to go beyond just Chromecast support to create a better way to seamlessly watch content on all of your devices, a feature we are calling Philo Connect."

One caveat here: It doesn't work with first-generation Chromecast devices.

Philo currently sports 61 channels for the aforementioned $20 a month, and they're mainstream channels like A&T, AMC and BBC America, all the way to Vice and We TV.

Philo also allows you to record live shows for up to 30 days. It supports streaming on as many as three devices at once, and you can have up to 10 profiles per account.