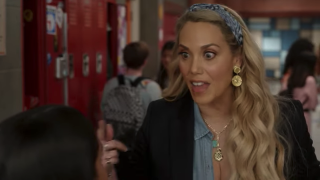 If you're a fan of Saved By The Bell, get ready to head back to Bayside. Peacock is rebooting the high school comedy, which ran from 1989-1993, with a new version of the show that also features some of the show’s original cast. Today they released a teaser for the show, and fam, it looks a little rough.

In the clip, Mario Lopez (Slater) and Elizabeth Berkley Lauren (Jessie Spano) kick things off as adults, who appear to be chaperoning a dance. At a table to the side, Jessie asks Slater if he ever wishes if he could go back, to which he responds “Sure, do”

Cue a montage of clips of the new cast of the show, which seems to bear some similarities to the original. It looks like there will be a young Zack-like character in the show and a Lisa knockoff… there’s even a Screech replacement that looks like he’s a waiter at The Max.

Prepare yourself: It’s a lot of 80s kitchy humor in one place.

That said, the show also seems like it’s self-aware of that fact, at least a little bit. The trailer is set to the song “I’m so excited,” which if you remember played a critical role in the iconic episode of the show where Jessie gets addicted to caffeine pills.

If you don’t remember that episode, you can and should watch it here, she also recaps it briefly in the trailer when she appears to confiscate a bottle of pills from a student Mr. Belding-style. Just watch the thing already:

The reboot is essentially a sequel to the original show. Beyond appearances by present-day Slater and Jessie, Mark-Paul Gosselaar, who played Zack in the original show, is expected to show.

Making the show a little cringe-worthy: Zack is apparently the governor of California in the terrible version of the universe, and has gotten into trouble because he’s closed too many low-income schools. He suggests sending the kids from low-income schools to Bayside where the kids interact with the school’s privileged student body. Presumably fun antics ensue?