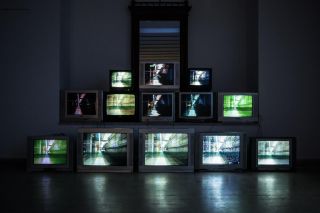 The NBA Playoffs return tonight with Game 4 between the Miami Heat and LA Lakers. Before the game, Jimmy Kimmel is also hosting a pre-game show with guest Tom Hanks.

Beyond basketball, there's also a new episode of Ellen's Game of Games tonight as well as the debut of FOX's new series neXt.

The NBA Playoffs continue tonight with Game 4 between the Los Angeles Lakers and the Miami Heat. Like the other playoff games, tonight's game will be played from the ESPN Wide World of Sports Complex in Orlando, Florida.

Watch at 9pm EDT on ABC

Jimmy Kimmel is hosting a new live show tonight in advance of the NBA Finals. Tonight 's guest is Bill Murray. He'll appear on the pre-NBA Finals show right before we see the Miami Heat take on the La Lakers in Game 4 of the finals.

Watch at 8pm EDT on ABC

FOX's newest series neXt debuts tonight. Silicon Valley pioneer Paul LeBlanc built a fortune on the world-changing innovations he dreamed up. After discovering that one of his own creations – a powerful artificial intelligence called neXt – might spell doom for humankind, Paul tried to shutter the project, only to be kicked out of the company by his own brother.

Ellen's Game of Games is back tonight! The new season begins with contestants playing "Blindfolded Musical Chairs," "Dizzy Dash," "Oh Ship!" and newcomer "Name Dropper." The winner of each of the first four rounds advances to "Know or Go" and that winner advances to "Hotter Hands" for a chance to win a cash prize.

Watch at 9pm EDT on NBC

Gino, the most admired western lowland gorilla at Disney’s Animal Kingdom, celebrates his 39th birthday with animal manager Rachel, who’s known Gino since he was a teen. Gino’s presented with a storybook-worthy cake, but festivities are stalled when he struggles to overcome a chest infection. Meanwhile, animal keeper Lori notices a lump on beloved alpha lioness Kinsey, which requires urgent medical attention, but transporting the 300-pound cat to the Veterinary Treatment Room poses a challenge. Over at The Seas with Nemo & Friends at EPCOT, aquarist Amanda, who’s expecting her first child, prepares to welcome another little ray of sunshine into the world: a spotted eagle ray pup. At Discovery Island, trainer Katelyn teaches two newly arrived macaws, Santiago and Emmett, the navigation skills needed to become members of the Winged Encounters flight team.