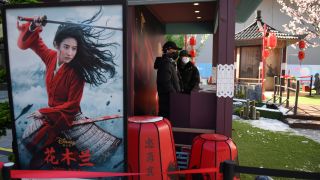 The closure of theaters for months and months — with no real end in sight in the United States — keeps taking its toll on the entire film industry. Tentpole movies keep pushing back their dates. That's understandable for some, and worthy of a shrug for others.

Meanwhile, some movies have opted to go the streaming route, and Disney+ has quickly found itself on the forefront of that movement. Hamilton was one of the first big ones. The One and Only Ivan is up next. And on Sept. 4, the long-awaited live-action Mulan will see release on Disney+.

Only this time Disney is doing something different. It's taking a page out of its UFC playbook. To watch Mulan, you'll need a Disney+ subscription. And at $6.99 a month (or $12.99 for the Disney+/Hulu/ESPN+ bundle), that's not a horrible deal. But like UFC pay-per-view events, you'll have to pony up extra for the big show. Mulan is being released as a $29.99 "Premium Access" deal — and we're awaiting details on what exactly that means. Will the movie be available in Disney+ forever after you pay? Or is it just a rental period? And how long would that period last?

The move may be controversial (what isn't these days), but it's also a good one.

The live-action version of Mulan is the first title to be a part of Disney+ Premier Access. It requires the usual Disney+ subscription, as well as a premium fee to actually watch the content. You pay once, and then watch Mulan as much as you want as long as you keep your Disney+ subscription.View Deal

Releasing Mulan for a premium fee on Disney+ is good for Disney+. It's going to attract new subscribers who haven't been lured in already. (Disney+ now has 60.5 million subscribers, by the way, but there are certainly more to be had.) And that extra $30 on top of the Disney+ subscription fee (which Disney certainly hopes will be recurring revenue) will help make up some of the difference of what Disney is going to lose by Mulan not seeing a theatrical release. It won't make up the full difference, but it's better than nothing.

And releasing Mulan on Disney+ is good for Mulan fans. We don't have to wait any longer to watch the movie in theaters and instead can kick back at home and enjoy it that way.

Is it the same experience as taking yourself or your kids to the theater? Certainly not. It's not as special. (Or as sugary.) You won't be watching it on a screen anywhere near as large. Chances are your audio setup at home isn't as good as what you'll get at the theater.

But on the other hand, there's a pretty good chance you're going to come away from Mulan having spent less than $37. (Hell, my kids spend that much on the junk food alone, never mind the tickets.)

None of this is ideal. Disney CEO Bob Chapek said as much in announcing the move to Disney+.

"Like many companies, we've had to find innovative ways to conduct our business during the pandemic. While view this as a devastating situation for everyone affected, it's also forced us to consider different approaches and look for new opportunities."

Disney found one. And it didn't have to look too far.

And it's not like Mulan isn't going to eschew the theater experience altogether. The film will be released simultaneously in theaters in markets that don't yet have DIsney+, and in which Disney hasn't yet announced plans for its streaming service. That's still a pretty big chunk of the world. (Before you try to book a plane ticket, though, remember that those of us in the U.S. are currently allowed in only a handful of countries, thanks to our poor response to the coronavirus. Want to see Mulan in theaters? Wear a damn mask and let's beat this thing.)

"We thought it was important to find alternative ways to bring this exception, family-friendly film to them in a timely manner," Chapek said.

He's right. It's maybe not the way anyone wanted. (Or maybe it is.)

But film in a can isn't any more than an extremely expensive paperweight.