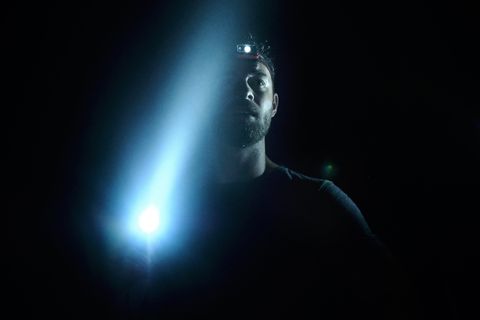 Black Water: Abyss is competant carnivorousness when it comes to crocodile thrills and chills mixed with the ticking clock anxiety of additional flooded stakes.

Not that, since Jaws, it's ever been safe to go back into the water, but now you have to worry about caves, too. Andrew Traucki's Black Water: Abyss takes a page from the 47 Meters Down: Uncaged playbook by increasing animalistic terror through claustrophobic imprisonment. It's bad enough when sharks or crocodiles hunt human prey, but it's even worse when said snacks trap themselves in flooded underground cave systems. Those familiar with Traucki's Black Water and The Reef already know the filmmaker can deliver underwater thrills, but it's Ian John Ridley and Sarah Smith's screenplay that'll be this film's divisive make-or-break.

The impetus for a spelunking excursion comes from when Cash (Anthony J. Sharpe) discovers an uncharted cave system while part of a rescue team searching for two lost hikers. His buddy Luke (Luke Mitchell) convinces his partner Jennifer (Jessica McNamee), plus two friends, Viktor (Benjamin Hoetjes) and Yolanda (Amali Golden), to spend a sunny day exploring nature's secret hideaways. After rappelling through an entrance hole, and reaching a large cavern lake, incoming storms shift the rocks in a way that clogs their exit. Worse off? The water level continues to rise. Even worse still? They're inside a crocodile's territory. I think I've had approximately twelve-thousand nightmares about this scenario?

It'd be difficult to squander the inherent doom of Black Water: Abyss, given how all escape routes are only divable and a hungry creature can strike at random. Traucki favors the darkness of cavernous enclosures, illuminating scenes with headlamps strapped to character noggins. As they flail in panic and swim towards higher-up rock formations where the croc can't reach, visibility is minimal to create this intensified effect of unknown threats. Don't expect cinematography that blows the cave's frame wide and clear. Flashlight ambiance increases a threat level that's dimly natural and quite dreadful as water continues to pour into the rapidly filling chamber.

Traucki's style is far more suspenseful than action-packed. Where 47 Meters Down: Uncaged recreates a slasher vibe with finned killers (hilariously at times), Black Water: Abyss is about silent isolation, primal stalking, and shorter bursts of "horror" when the crocodile lunges at its victim. It's not Deep Blue Sea 3, where SYFY mentalities assure ridiculously over-the-top deaths for entertainment value. Traucki is about highlighting the ferocity of Mother Nature, and emphasizing survivalist paranoia as man finds himself trespassing on a beast's home turf. It's slowly drawn out, steadily aggressive, and bites back hard when chomp-chomps are required. Elements of Natural Geographic horror are not lost.

Ridley and Smith lose me a bit in their desire to script drama that seems forced and overblown, given the already grave stakes. Black Water fans already understand Traucki's history with pregnant characters. This time around, Ridley and Smith once again include a pregnant role (Yolonda), but add a cancer survivor (Viktor) and relationship suspicions (Luke and Jennifer). As the croc forces these adventurers to face reality head-on, gossipy subplots intertwine and drop bombshell reveals in ways that seem almost unnecessary to the advancing nature-based horrors at the forefront. Maybe it's just me, but betrayals and tension and emotional responses seem a bit manipulative in ways that distract from the toothy danger gliding across the water's surface.

Albeit, the characters themselves are not unlikable. Their predicament may be more incestuously wicked than an episode of General Hospital, but actors are proficient at remaining more fearful of their impending deaths. It's just sometimes a struggle, or even a tad outrageous, to think so many hidden secrets could simmer undetected in a single group of four friends. Not unbelievable, yet excruciatingly extra in short bursts.

Compared to Black Water, Andrew Traucki's sequel is a more accomplished thriller. There's some spotty crocodile CGI, and a third-act swerve that'll make any comparisons to The Descent even more appropriate past locational atmospheres. Still, Black Water: Abyss remains a frantic struggle against impossible odds. You get a dominant, alpha reptile, plenty of inflicted trauma, plus a sense of urgency mixed with hopelessness that is rather compelling. It's not the creature-feature you'll flip on over a few beers at midnight, but it'll get the job done a little earlier in your aqua-horror marathon when attentive audiences are ready to cringe at the many ways Earth can kill us within a millisecond.

Black Water: Abyss will be available to rent on August 7.