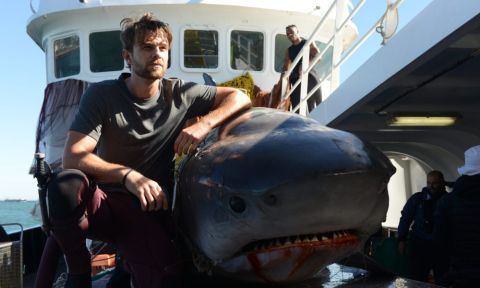 Deep Blue Sea 3 is stupidly entertaining, ferociously minded, and accepts its place as a B-movie for the better.

After Deep Blue Sea 2, prospects of a "Deep Blue Franchise" seemed sunk. It was rough goings for aquatic horror fans. Based on its lackadaisical poster design (gaping shark mouth, unaware swimmer), Deep Blue Sea 3 instilled no such confidence as anything more than another straight-to-video afterthought. Although looks, as you know, can be deceiving.

Deep Blue Sea 3 is this SYFY-on-steroids tropical survival flick that honors the "sinking city" scenario of both previous films with some gnarly aquatic carnage. It's straight-up looney tunes. A flimsy narrative builds around ridiculous shark-bite deaths, which play hilariously against "Hallmark" romantic moments that almost immediately end in tragedy. One of the deaths even recreates an online meme I've seen shared countless times? Director John Pogue knows the film he's making and handles the outrageousness with much more stability than the previous sequel's cheap cash-in attempt.

On the fishing island of Little Happy - a crescent-shaped shanty town you could walk across in two minutes - vlogger Emma Collins (Tania Raymonde) observes the natural underwater ecosystem. Great whites like "Sally" swim to the habitat, where Emma and her team study the effects of climate change on aquatic wildlife. That's until ex-fling Richard Lowell (Nathaniel Buzolic) shows up with a hired dive team, as bull sharks they're hunting enter the area. Richard aligns himself as an ally, claiming scientific research reasons, but lead hunter Lucas (Bren Foster) only wants to collect his check. Oh yeah, the bull sharks are also genetically modified and smarter than humans, so the danger level reads critical?

It's a canonical continuation of Deep Blue Sea 2, where megarich Carl Durant (Michael Beach) repeats the follies of the original film anew. The bull sharks in question act with heightened aggression and intellect. Big Pharma wants to cure Alzheimer's by altering shark brains and accidentally creates underwater assassins of the finned variety. The Aquatica Project was a disaster, the Akhelios Complex sank, and now Emma's team faces foes created in labs despite their outward appearance. It's a ludicrous "playing God" scenario, where this third sequel enters a realm of "collateral damage." Even at that, it still takes a hot minute to surface the film's action attractions.

Once the sharks appear, and we blow through all the exposition about conservationist protection versus exploiting Mother Nature's babies for profit? Deep Blue Sea 3 is the splashy chomp-chomp movie aquatic horror fans with a taste for bonkers brutality desire. Divers aren't just eaten; their half-devoured corpses float past the screen with entrails dragging behind. Fight sequences are interrupted as our hero, on his back, hoists his combatant into the air while a shark is gliding towards them both: cleanly delivering a magnificent finisher. Pogue's film is bloody and audacious, with some gnarly chunks honoring uber-violent aquatic horror realms. In that respect, it keeps the Deep Blue Sea dream alive.

There's no shortage of clichés, though. Like, more than a school of a hundred piranhas.

What leads up to Little Happy's destruction couldn't be more familiar. Richard's introduction as Emma's one-time colleague and lover sets up a massive betrayal swing knowing his hand is in the pocket of wealthy investors. You've also got the Hawaiian shirt aficionado and IT guy "Spin" (Alex Bhat), young sonar whiz Miya (Reina Aoi), and their forced-as-hell relationship sweetness. Lucas is ruthless without reason beyond villainy, all the damage is somewhat avoidable, but again, that's not why you're watching Deep Blue Sea 3. You're watching for hilarious character arcs like Eugene Shaw, played by Emerson Brooks (he's Dwayne Johnson in still-buff but a slightly deflated form, I'm convinced), and his cringy zingers that include puns on words like "chum."

I put Deep Blue Sea 3 in the same camp as 47 Meters Down: Uncaged. It might not be exceptional aquatic horror, but it's a damn fun shark attack flick that gets the best moments right. Sure the creatures are mostly, if not wholly, computerized graphics. Perhaps you've seen the cheesiest emotional beats time and time over because the script follows a formula. What you haven't seen is the mix of explosive-tipped darts and quite insane goresploitation demises, human or animal. For a late-night watch, with friends and beverages (preferably garnished with tiki umbrellas), Deep Blue Sea 3 is a redemptive plea to keep this toothy, temperamental franchise surging forward into even grander nautical obscurity.