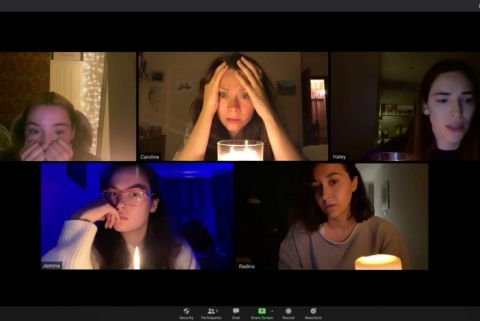 Host is an inspired evolution in possession horror that blends new-age scenarios with old-world demonics for a dreadfully horrific genre encapsulation of our current societal dynamics.

As a passionate advocate for "screen life" horror, I must implore you to watch Rob Savage's Host (on Shudder). Its impetus is simple: how do we create scary cinematic stories with social distancing and lockdown orders in place? With the skyrocketing increase in virtual hangouts, horror creators already knew that answer. Films like Unfriended, The Den, Cam2Cam, and more have paved the way for an entire subgenre of at-home, by-yourself filmmaking that needn't backlot sets nor in-person crews. Of course, like any subgenre, success is not guaranteed. If anything, that's what makes Savage's bone-chilling technological possession all the more impressive.

At Haley's (Haley Bishop) suggestion, six friends gather for a Zoom call seance. Their professional medium comes recommended by Haley, as she's a friend who's led many an in-person summoning circle. Caroline is nervous (Caroline Ward), Jemma (Jemma Moore) is a skeptic, and Teddy (Edward Linard) wants to get drunk. Their spirit guide warns against not taking their unearthly connection seriously, yet one participant can't help but pull a prank for attention. I'm sure I don't have to tell you what happens next. We've all seen enough horror movies to understand the consequences of provoking the dead.

In a nutshell, Host is Paranormal Activity by way of Unfriended. "But Matt, isn't that just Unfriended?" Yes and no.

Host plays with its surroundings like Paranormal Activity, enjoys the seriously-suspenseful demonic torment, and is quite adept at elevating audience heart rates via household means. The problem with many "screen life" films is "action" that blurs into unseeable messes or cuts a screen to blackness. Savage, with co-writers Gemma Hurley and Jed Shepherd, exploits the hiccups that techno-horror introduces into an already perilous activity when supervised in real-life. The so-called magic tricks the director plays to create the sensation of an entity haunting each girl's tile is methodical, compelling, and sincerely unsettling.

Since "screen life" horror is based on our daily interactions with apps and programs and digital platforms, there has to be a genuine feel to usages. As someone who's relied on a recurring Zoom call for socialization every Saturday night since the beginning of March, I believe my pedigree allows me to claim Host nails the ebbs-and-flows of virtual hangouts. The complications that arise from wonky internet connections, to toying with joke Zoom backgrounds, to the momentary frustrations of being alone and not in-person with those seen populating on-screen windows. Actors and actresses feed into isolation horror while adapting to their new, foreseeable "normal," which only becomes more and more horrific. Fear translates past a screen-locked barrier.

All that said, I won't claim Host rewrites the "screen life" horror game. Its establishing conflict is predictable from seventeen miles away, ignoring horror's golden rule that I've already stated: don't mess with the unknown. From here, Savage must make the most of recording frames no wider than laptop cameras in any way possible (phone transfers, selfie sticks, so on). Caroline explores her attic, Teddy navigates his stay-at-home hideaway, and more characters find surprises in their otherwise humble apartment spaces. There's no reinvention, but that's hardly noticeable given how Savage nails the fundamental competencies of an otherwise fickle subgenre.

I'm forever intrigued by "screen life" horror, and think it's one of most innovative, divisive, big-swing subgenres. It's a lot like found-footage cinema, in that regard. When treated like an easy path to indie horror profitability? No one should endure some of the misfires I've struggled to finish. When done right? Titles are the cutting-edge of in-your-face terror. Host, in terms of "screen life" horror, is an exemplary representation of the latter. A sub-hour Zoom nightmare (canonical with the program's no-subscription time limitation) that is terrifically tense, notably terrifying, and quite possibly some of the scariest realism horror fans might stream-and-scream this year.

I know we're all afraid of a reality post-COVID where screenwriters keep forcing us to relive our lonesome pasts in their "inspired" stay-at-home stories, but if filmmakers can capture and manipulate a moment like Rob Savage? There's hope for all the "quarantine screenplays" on the horizon.

Host will be available to stream on Shudder on July 30th.