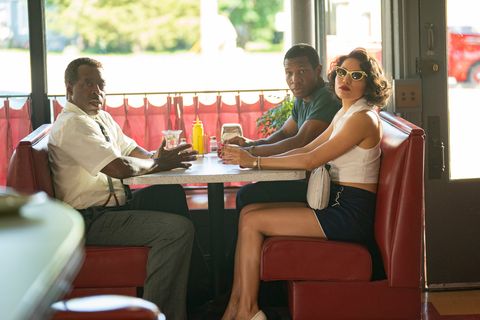 A stellar opening to what looks to be an interesting and cryptid-filled ride.

When this series was in its infancy, some people wondered how Lovecraft Country would contend with H.P. Lovecraft’s deep seeded racism in the same way that Matt Ruff’s 2016 novel was able. While it’s too early to confirm if the series will honorably adapt its predecessor, if the first episode is any indication, the show will have Cthulu’s creator spinning in his grave. And I mean that as the deepest possible compliment to series creators Misha Green and Jordan Peele.

As the episode opens, we immediately meet series lead Atticus Freeman (Jonathan Majors). Atticus, or ‘Tic’ to his friends, is an army vet returning home from South Korea. When he makes it there, he quickly learns that his father – a known drunk - has been missing for the last few weeks. No one in town knows where he went, but the local bartender says he hasn’t occupied his stool lately and notes that last time he saw him he was leaving in a fancy car.

Bolstered by the bartender’s tip and the last letter from his father noting his departure to Lovecraft Country, Atticus, his uncle, George Freeman (Courtney B. Vance), and Letitia Lewis (Jurnee Smollett) head out of town to search. “Lovecraft Country” not being an actual place in this mythos, Atticus’ father is actually calling them to a town called Ardham. The three travelers will make it there before the credits roll on the first episode, but they’re going to meet a whole lot of monsters along the way.

While there will undoubtedly be a few detractors who don’t care for the fact that Lovecraft Country takes its time to get to its cryptids, there are plenty of monsters to be found from start to finish in the show’s first episode, “Sundown”. The racism of a segregated America is actively highlighted here, as it undoubtedly will be throughout the series. While on their journey, they’re met by several people out to kill them (and a whole lot of neanderthals uninterested in physical violence but know they're perfectly safe being overtly racist). This includes townspeople who burned down a Black-owned diner and the Sheriff of a sunset town.

The townies get the benefit of going quick (though not at the hands of Atticus or his compatriots). The Sheriff and his cronies? Well, they’re not so lucky.

Through the episode, there are several hints of mysterious characters in play. Atticus makes a phone call to someone in South Korea who ominously tells him that he shouldn’t have left, and the three are saved by a mysterious blonde woman in a fancy car while being chased out of town. It’s also probably worth noting that said mysterious blonde woman is able to stop the pursuing truck in its tracks without making any kind of physical contact with it.

The final moment of mysterious intervention is shortly after the Sheriff’s men meet their timely ends. The woods they find themselves in are notoriously filled with wild animals that attack at night, but what they find is no pack of wolves. In their haste, they quickly dub the gruesome creatures as some kind of vampire. Inaccurate (they seem to be shoggoths?), but good enough for their needs while running for their lives.

Obviously, this is when the gore kicks in. And what well-done gore it is!

The monsters quickly rip their way through the Sheriff’s party. Decapitations, limbs flying, the works. It’s dark, but they make sure to light the scene well enough that you can see the officers get what they had coming to them. By happenstance, Atticus discovers that they don’t care for light. It’s this discovery that leads to the most beautiful shots of the episode. Among them being Letitia using her camera to startle a monster away from the car long enough for her to hit the gas, and some absolutely stunning flare work before the party is saved by the dawn.

Bloodied and exhausted, they make it to Ardham by foot. They’re met at the door of a fancy mansion by a man whose entire vibe can only be described as “Aryan Youth” (an undoubtedly intentional decision). Of note: the car that saved them a couple towns back occupies the driveway. It also happens to be an appropriate level of fancy to indicate that Atticus’ father can very likely be found in the same mansion.

You can never judge a season by its first episode, but “Sundown” is one hell of a pilot. Jurnee Smollett absolutely dazzles as ‘Leti’ Lewis. She saves the men’s asses several times throughout the episode despite being questioned every step of the way. There’s also a hint of her involvement in protests while she’s arguing with her brother. While Atticus’ remains of a huge interest (the guy was inexplicably on a battlefield taking on monsters with Jackie Robinson in the first two minutes, after all), it’s Leti’s journey that I’m most interested in right off the bat.

Lovecraft Country’s first episode is bloody and weird. It’s filled to the brim with characters that the writers immediately make you care about, and relationships that are allowed to be both real and endearing. There is a world of monsters and gun chases unfolding, and they still manage to make you interested in young Diana’s (Jada Harris) comic and Ruby Baptiste’s (Wunmi Mosaku) struggle as a burgeoning vocalist. You’re engaged in George and Hippolyta Freeman’s marriage as much as you care about Leti and Ruby’s loving but complicated sisterhood.

In short, it’s beautifully done and I can’t wait to see more next week!