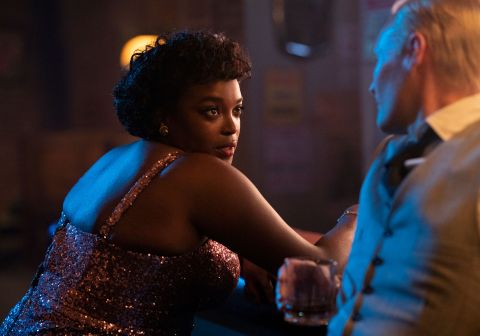 'Lovecraft Country' flashes its ambition by attempting to comment on race, gender, and sexuality in 1960s Chicago, and while some elements take an unfortunate backseat, Wunmi Mosaku carries 'Strange Case.'

This week’s Lovecraft Country episode, “Strange Case,” allows Ruby Baptiste (Wunmi Mosaku) to infiltrate her oppressors' ranks. It’s a showcase for the downtrodden musical entertainer who struggles not only against segregation biases but gender aggression that has her singing the blues. William (Jordan Patrick Smith) offers her a drink, a night of passionate companionship, then a dosage of magic: the ability to achieve “metamorphosis” as a Black woman under a white skinsuit.

For Atticus (Jonathan Majors), we see the violence he keeps buried. Montrose atones for his execution of Yahima (Monique Candelaria) when Atticus unloads a flurry of hammer-fisted punches as his rage bubbles. A seething Atticus is confronted by Leti (Jurnee Smollett) in her basement darkroom where he demands photo evidence of Titus’ missing pages that Montrose destroyed. Leti stands her ground, and Tic storms off as the camera slowly pans down to Leti’s now-signature slugger’s bat. She will find him a short time later, after he's had time to cool down, with a roll of undeveloped photos. Despite previously flashing his fangs, Atticus is immediately apologetic upon seeing how much he's spooked Leti. The apology is followed by a rather steamy rekindling between the two. All is well, and Atticus can continue transcribing an ancient alphabet with cooler tempers.

For Montrose, now sporting a swelled-shut eye and more bruises, he embraces a relationship now thrust into the spotlight. His sexuality had been hinted at, as last episode Atticus is told about his father’s hip-attachment to Sammy (Jon Hudson Odom), but there's no more ambiguity here. Montrose first embraces Sammy at his lowest low, just battered by his son, and takes his frustrations out shortly after the two unbelt their pants. Later, we glimpse tenderness as Sammy butters Montrose in front of some other drag queens preparing for the night’s performance (notice some Ru Paul favorites), which ends with Montrose’s first gasp of freedom on a dance floor surrounded by accepting gazes. His metamorphosis, before anything reductive happens, is significant.

Although, “Strange Case” is Wunmi Mosaku’s showcase. Her character is offered the ultimate perspective swap. Ruby can parade around unnoticed as the cherished white socialite Ms. Davenport (Jamie Neumann). She ignores the cash wad next to William’s chameleon potion because she has attained the only currency she needs: whiteness. No better exemplified than by a shot as “New Ruby” is comped a free ice cream cone, vanilla of course, in the most pristine powder-white creamery this side of Plainsville. Ruby flaunts the white experience Southsiders only hear about, maybe fantasize about, as a front-row ticket.

Unsurprisingly, everything comes with a price.

William workshops a deal with Ruby. She may leave and explore as she pleases, use the potion to her desire, but at one point, she’ll be required to repay William’s generosity. When the time comes, Ruby finds herself in the closet of Capt. Seamus Lancaster (Mac Brandt), with a mumbling reanimated corpse brought back to provide intel. She’s there to plant a yet-to-be-activated rune in the Captain’s office, who we discover uses fantastical conjurings of his own by way of his Frankenstein-ed body reveal. Christine (Abbey Lee) drops a line about how William is the rightful chair-holder of the Captain’s whitewashed boys club, and Ruby’s just set their takeover plan in motion. Oddly, that’s not even the worst of her dilemmas.

What Ruby experiences as an Assistant Manager at outlet boutique Marshall Fields, where they’ve recently hired their first Black employee, reveals the hidden horrors of Ruby’s predicament. All her co-workers, these horrid white career women who equate going to a South-of-town club as a “safari,” never epitomize the dreamland she so desires. She’s still oppressed, still silenced, and even worse, the store’s first affirmative action hire doesn’t even boast a high school degree. There’s a lot of wrestling with complex disdain from within, be it Ruby’s visible frustration with the “mediocre” representation of Black culture being championed as a diversity win or the monstrous actions she’s a part of with the white Marshall Fields staff. Oodles to digest, as Ruby only finds comfort in her new skin for a few blissful moments of sweet treats.

Director Cheryl Dunye dissects Ruby’s psychological responses with a careful balance that revolts against societal terrors and wolves who are always lurking, not withholding redemptive payoffs or flesh-floppy gore. Ruby’s transformations conclude as her original form bursts from what essentially becomes a latex human suit, with peeled-away patches of back meat hitting the floor in a runoff blood pool. It’s gruesome, but nothing as explicit as the revenge Ruby enacts against her “nice guy” manager Paul (David Stanbra). In a quite graphic sequence, Ruby binds Paul under the guise of cheating on his wife and then sodomizes him with the point of her stiletto heel as she morphs atop the victim. Ruby’s vigilantism ends when she overturns Paul and tells him to acknowledge her skin color, the woman who committed the act.

Then, in the episode’s first of two significant twists, it’s revealed that William is Christine using the metamorphosis potion, which says so much. An all-powerful, supernatural enchantress who can erect invisible barriers and whatnot, must still present herself as a man to gain equal access to her male counterparts. This makes sense now with multiple lines uttered about Christine not deserving a seat at the table, with usages of the “c-word” for emphasis. It ties into Ruby’s combo-punch of being colored and a woman. That sucker-wallop of hopelessness where even if she altered her exterior presentation, she’d still face immense pressures—the episode’s proudest moment of horror.

Otherwise? Lovecraft Country gains some momentum back after a lackluster fourth episode adventure. Main characters continue to shine - Jonathan Majors, Jurnee Smollett, and Wunmi Mosaku in specific - but tonight’s developments show the sharpest usage of Lovecraftian frameworks to exploit racial unrest. Ruby shines while her world crumbles, granted a free pass that ends up tarnishing fantasies that, in their wake, empower her authenticity. Oh, and Atticus makes a phone call to Korea that ends the episode on a haunting note on anonymity that bodes well since the last thing we see are the letters “D-I-E.” Onward and upward, into the hellscape we proceed.