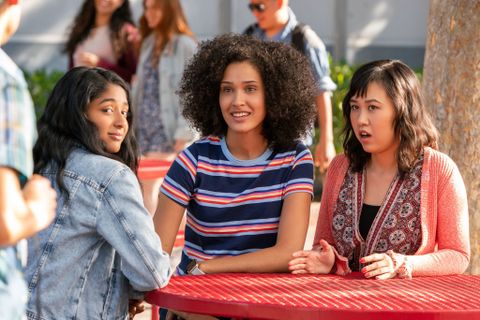 A smart, sassy feel-good teenage series that's funny — and touching — in all the right places.

The odds were stacked against my enjoying Never Have I Ever . I'm a middle-aged white guy. I've never been a teenage girl (though I do have one in my home), and my parents aren't from another country. And half-hour comedies aimed at the high school set — where you only need 5 minutes to see the lesson that's going to be learned when the episode wraps up 20 minutes later —  really aren't my thing .

And I enjoyed the hell out of it.

That's mostly because of the writing, married with some snappy acting. And a pretty major assist from John McEnroe. As he says in the pilot, "It'll make sense later, I promise."

The 10 episodes of the Netflix series created by Mindy Kaling and Lang Fisher follow Devi Vishwakumar (Maitreyi Ramakrishnan) and her best friends Fabiola (Lee Rodriguez) and Eleanor (Ramona Young) through their sophomore year of high school in tawny Sherman Oaks, Calif. They're nerds, but still good-looking nerds, I'd argue. And they're mostly happy with their place in caste system that is high school. (Yes, that's very much a cultural play, which is at the forefront of Never .)

"I'd like to be invited to a party with alcohol and hard drugs. I'm not gonna do them, I'd just like the opportunity to say 'No cocaine for me, thanks. I'm good.' And ... "I'd really, really like a boyfriend. But not some nerd from one of my AP classes. ... I just want him to be a stone-cold hottie who could rock me all night long."

Devi's main foil — besides her family — is Ben (Jaren Lewison). It was so bad they had to spilt up who was going to rule which nerd categories with a contract in the sixth grade. And you very quickly know where this is eventually going to lead. But they're just so much fun to watch together you enjoy the ride.

Devi's home life is harder. Her father died a little less than a year ago, and she took it so hard she lost the use of her legs for a few months. That's ... weird ... and it's not really explored too much more than that, and for the sake of a little physical comedy. But nobody's really gotten over Mohan's untimely heart attack in the middle of Devi's orchestra performance. Not his wife, Nalini (Poorna Jagannathan), and certainly not Devi, who continues to see Mohan in spirit.

Complicate that by the culture shock and the complexities of an immigrant family, and there's a lot going on here. But Never movies quickly. The stories are fast and set up nicely at the front of each episode, culminating in the title reveal for Episodes 2-10. "Never Have I Ever ... pissed off everyone I know." It's a take on the game, and makes more sense once you have that context.

The series is all about Devi (that's pronounced "Davey," by the way) and her relationship with Ben, and her near-obsession with high school hunk (and brilliantly named) Paxton Hall-Yoshida (Darren Barnet), but it has nice arcs with Fabiola and Eleanor and Devi's older cousin, Kamala (Richa Moorjani), who's hot and brilliant and trying to avoid being married off to someone she hasn't even met yet.

Never touches on all the usual high school-age pressure points. Sex. Alcohol. Social media. But it mostly avoids the usual tropes and instead attacks them head on. The sex talk isn't too graphic (and there's no nudity — these are supposed to be underage kids, after all) and even the language avoids any real F-bombs but otherwise is remarkably consistent with how you'd hear teenagers talk today. (Maybe a little more coherent, actually, which is not a bad thing at all. My kid could use a writer's room.) The drinking is maybe a little too casual — but then again maybe it isn't — and is the one concern I'd have in watching this with my own teenage daughter.

Or maybe even more grating? All the product placements. It got to be a bit much. (On the other hand these shows aren't going to pay for themselves.)

And at the end of the day — and at the end of the series — it's sweet. It hits a dad right where it hurts. (The heart, not the wallet.) It's funny AF, as the kids would say, but not crass in a Superbad sort of way. The one-liners are exactly what you'd expect from a project led by the creative likes of Kaling and Fisher, who worked together on The Mindy Kaling Project . McEnroe maybe isn't the best narrator out there, but it's worth the slightly awkward recitation to hear him slip in slang that nearly made me grab my kid for translation purposes.

And, like he promised, it did all make sense later.

Never Have I Ever is definitely worth a watch. None of the 10 episodes is longer than 30 minutes. And if you don't mind a few squeamish moments, it's one you could certainly watch with your own teenager.

And it might even serve as a reminder that they're just smaller, unfinished people, too.