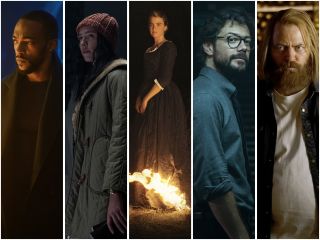 There's more content than ever available to be streamed at home. And good thing, too, since we're all going to be spending a lot more time at home than we expected this year.

There also a lot of ... not great ... shows out there. That just sort of comes with the territory. If companies like Netflix and Amazon are going to be pumping out as many shows as they are these days, they're not all going to be great. So we're going to have to take the good with the bad.

Fortunately, there are some real gems out there. Here are the best things I've watched this year. I'll keep updating as I keep watching.

This eight-part series looks at the journey of 5,000 kilos of cocaine from the views of the buyers, sellers and brokers. Based off the book by Italian journalist Roberto Saviano , ZeroZeroZero follows the Italian mafia family who's both looking to buy the drugs and stop the shipment, the Mexican cartel that's providing the merchandise (and the army they acquire), and the New Orleans-based brokers who make the deal happen.

It's an epic tale that spans three continents, more death than you can count, and it's immaculately shot. The Mogwai soundtrack that goes along with it is as perfect as it gets.

It's not an easy watch — it's extremely brutal, even by today's standards. And you'll be watching a lot of subtitles in the sections that don't involve the Americans (though there are plenty of subtitles during the Americans' sections, too). But this easily makes my top list for the year.

With so many reality series that involve an awful lot of awful half-naked people, it's understanding if you saw the thumbnail for White Lines and skipped on by. But you'd be missing out on a spectacular 10-episode whodunit from the creator of Money Heist . ( See below for more on that one.)

The question is simple: Who killed Axel Collins? He disappeared 20 years ago while dominating the DJ scene on the Spanish isle of Ibiza. His body was found on the mainland and immediately raises more questions than it answers. So his sister, Zoe, heads to Ibiza to figure things out for herself.

The result is a wonderfully paced series that's at times serious, silly, and plenty sexy. (All of those things pretty much sum up Ibiza.) And it's also more digestible than Money Heist (which is entirely in Spanish), since half of the protagonists hail from Manchester, England.

I'm only halfway through this series based on the work of Swedish artist Simon Stålenhag , but it immediately earned a spot on this list. (And I'm buying the book , too.)

Picture a small-ish company town in the 1970s or 1980s (back when such places still existed), only the company is some sort of secretive sci-fi place — the Mercer Center for Experimental Physics — that works on ... well, stuff. "When somebody says something's impossible, I prove it's possible," says MCEP's founder, Russ.

TFTL is more about the people than the tech, though the tech itself — which very much is grounded in modern-day materials, even though the function far more futuristic — figures prominently, both as the cause of so much sadness, as well as a reminder of some part of society that doesn't really exist anymore, even though it's just sort of there in the background.

And that so much of what you see is left unanswered only adds to the show's beauty.

Devs is like what you'd get if someone watched Mr. Robot , marveled at the way it was shot, and said "Hold my beer." And if that beer belonged to screenwriter Alex Garland and his team. (You know Garland, of course, from Ex-Machina, Annihilation, Sunshine, 28 Days Later ... and The Beach.) And if FX allowed Garland to do what he does best, which it has.

The end result is Devs. It's the story of a Google-like company — something that has its hands in all kinds of things, but with a laser-like focus on a few — and its enigmatic founder, who tragically lost his wife and daughter. That explains the giant statue of the girl in the middle of the Bay Area forest. (There's a lot of Devs based in reality, like the daily bus ride to campus.)

We've had all kinds of answers teased out over the course of this limited series, including the answer to the cryptic "What is Devs?" But that still doesn't stop you from asking "No, really. ... What is Devs?"

There is a lot going on in the Altered Carbon universe. That starts, of course, with the idea that your body is just a "sleeve" and your consciousness is kept inside a digital "stack." That leads to all kinds of interesting plays on identity, which the second season of Altered Carbon explores even further.

I definitely miss Joel Kinnaman, but Anthony Mackie is great in his turn as Takeshi Kovacs. And it's great to see other familiar faces from Season 1 back as well. (I'd elaborate but, alas, spoilers.)

The second second wasn't as much as a mind-trip as the first, which had the added bonus of a whodunit to tie everything together. But it's still a solid B to Season 1's A-.

Portrait of a Lady on Fire (Hulu)

If you're going into Portrait of a Lady on Fire because it's the love story of two women and the potential for what that could do for the reptilian part of your male brain, stop. It's not about that. (OK, it's a little bit about that.)

Mostly this is about how two people pull themselves out of a dark place, knowing full well that it's going to lead them straight into another. They know it's going to hurt. A lot. And they're willing to let it hurt for what it means in the interim.

It's beautifully shot, and I'm pretty sure the same film wouldn't have the same impact if it were dubbed to English instead of in its native French. And because you're not going to take your eyes off the screen anyway, the subtitles shouldn't bother you.

Pandemic: How to Prevent an Outbreak (Netflix)

I started watching this in January, as I was preparing to take my family on a trip to China — and as reports of the novel coronavirus started getting serious. (Obviously that trip didn't happen.)

Pandemic is wonderfully shot for a documentary — the wide drone shots are scary good. It was interesting before we all went on lockdown. And now it should be required viewing.

This one isn't exactly new — the first season of the Spanish series Money Heist landed in 2017 — but it's new to me, having been rescued by Netflix. (With the fourth "part" new this year.) Frankly, I don't know where it's going to go. But I do know where it's started — a caper that's reminiscent of Spike Lee's Inside Man or maybe The Thomas Crowne Affair.

There's a lot going on, and there are a lot of moving parts. And it's a little stilted at times. (Though some of that maybe is in the translation.) But the ensemble cast keeps things interesting and fun, even when things turn deadly serious. And, frankly, I could use a little fun mixed in with all the darkness these days.