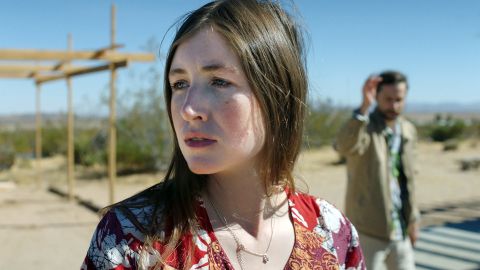 'She Dies Tomorrow' is ambitious filmmaking that doesn't quite say enough about what's on its mind.

She Dies Tomorrow seems unsure what it has to offer beyond its engaging central hook: what if you woke up one day with the knowledge that you were going to die tomorrow? Writer-director Amy Seimetz has established a scenario that is at once engagingly cryptic and ponderously simple, designed to provoke engagement with a narrative that becomes hollow once the mysterious pacing unravels to reveal intrigue that only goes skin-deep. It’s certainly interesting to see where She Dies Tomorrow is going from scene to scene, but once it becomes clear that the Big Idea™ driving the whole mechanism goes no further than it first appears, the film loses its luster and retroactively feels underdeveloped.

The aforementioned knowledge of one’s own death lurks within the head of protagonist Amy (Kate Lyn Sheil), though the film’s first fifteen minutes dwell on her wordless ennui so much that only a few sparse lines of dialogue contextualize it in hindsight. It’s unclear how she knows this apparently immutable fact of the day to come, but it's made apparent that her friend Jane (Jane Adams) is concerned for Amy’s wellbeing as she relapses back into alcoholism and plays Mozart’s “Requiem in D minor” on loop. However, after Jane leaves, the frame becomes awash with intense red and blue lights, and suddenly, Jane comes to the traumatic realization that tomorrow is the day she will also die.

From there, Seimetz plays with how anxiety and fatalism spreads from person to person, highlighting through various vignettes how different individuals would spend what they believe to be their last hours alive. Jane goes on an odyssey for interpersonal connection. A married couple (Katie Aselton and Chris Messina) spends one last quiet evening together. A rocky relationship (between Tunde Adebimpe and Jennifer Kim) is finally given permission to achieve honest closure. Amy herself meditates on the postmortem uses for her body, settling on the gruesome idea of having her skin converted into a practical leather jacket. Touches of deadpan humor tinge the extremity of each person’s realization of inevitable mortality, infusing gallows comedy with persistent motifs of microscopic and kaleidoscopic imagery that hint at the notion that there’s further meaning beyond the banality of our daily lives.

But that’s the existential quandary of She Dies Tomorrow: there isn’t all that much to it beyond its first impression. There’s just very little built into its elegantly simple premise, that cogitating idea that we would all behave differently if aware that our existence would soon end, or that our anxieties are transmittable through the most basic human empathy. The idea is raised, but then goes nowhere, so you’re left futilely waiting for a plot to capitalize upon the high concept, only for it to never elevate into a story worthy of its obvious themes. Seimetz gorgeously realizes a surrealist aesthetic, but that’s all it is: Aesthetic.

The film’s nihilism runs so deep that its thought experiment feels pointless, as aimless as the characters it’s putting through its high yet terminally amorphous stakes. With the exception of Amy, and maybe Jane if you squint a little, each of the other characters are sketches too thinly drawn for their arcs to mean much beyond the shallow and obvious, while Amy arrives at the conclusion of her story with more time-delayed despair than revelation. It’s a narrative without purpose or pathos, propelled solely by apprehensive feelings to the point of self-reflexive redundancy.

That said, I should not dismiss that She Dies Tomorrow is inevitably going to have its diehard fans. It’s a stylishly conceived film that uses its slow burn and deceptively scattershot presentation to effectively build intrigue for the majority of its eighty-four minute runtime. Some folks will embrace these existential ruminations as the entire point and defend it as a mood piece and metaphor for anxiety and depression. But, in this critic's estimation, such intrigue feels lacking without appropriate payoff. This is especially true when the film’s opening moments condition us to let the small moments wash over us and to expect that explanations for discordant narrative beats are forthcoming. So, when that payoff amounts to little more than the rote observation that we might take our own lives for granted, it belies only so much wasted potential from such an intriguing premise.