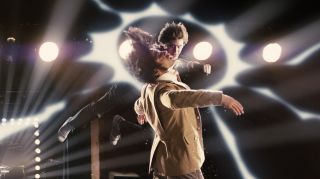 Why are the best video game movies never based on existing video game properties? Ilya Naishuller’s Hardcore Henry is a first-person-shooter brought to life. Timo Tjahjanto’s The Night Comes For Us, an insanely violent side-scroller that recalls Streets Of Rage. Edgar Wright’s Scott Pilgrim Vs. The World is defined by boss battle mechanics and narrative gaming structures galore. These achievements beg the question, does a video game movie depend on ties to platform entities such as Uncharted or The Last Of Us? Or will you allow me to make such a bold claim as insisting Scott Pilgrim Vs. The World is the most successful example of “video game cinema” done infinitely right?

Bryan Lee O'Malley’s graphic novels are, overtly, video game influenced. Wright’s adaptation was always going to be inherently “gamey” because O’Malley illustrated Scott Pilgrim Vs. The World as its own comic adaptation of video game cultures. Nintendo nostalgia turns Scott into this slacker heartbreaker exploring a rock ‘n roll RPG world (aka Toronto) that, flame swords and all, resembles an alt-punk Final Fantasy. Scott’s "princess" is held captive by a proverbial Bowser, with his League Of Evil Exes henchmen fulfilling the roles of obstacles along the way.

I argue my thesis based on a significantly overarching reason. One that doesn’t often compute when Hollywood video game adaptations fail their namesake predecessors.

Titles that make the transition from console to screen often face scripting that downplays video game architectures. I think about Resident Evil, and how Paul W.S. Anderson’s franchise inherited a wealth of riches in Capcom’s iconic survival horror series. While the films have their defenders, with the first three earning my longstanding respect, it’s still almost like Anderson fights against the very notion of the games' already-cinematic value by deviating as far off course as inhumanly possible. Wright, on the other hand, sees video game cinematics and storytelling modes as beneficial additives. An homage to another art form that’s recreated within a filmmaker’s sandbox.

Mind you, Scott Pilgrim Vs. The World isn’t a “video game movie” just because every scene hides twenty-thousand Easter Eggs. A “video game movie” isn’t something that only includes sound bites from The Legend Of Zelda: A Link To The Past. Or spouts know-it-all facts about Pac-Man’s origin. There’s talking the talk, then there's riding the Rainbow Road. Don’t get me wrong, Wright’s hypersensitive detail when rattling through countless callbacks is a driving force behind the film’s “geek culture” credentials - but it’s not what makes Scott Pilgrim Vs. The World such a heavyweight champion in the classification of video game cinema.

Wright’s creative devotion to the “cartoonish” abandon of comic book adaptations unlocks the hidden door to full video game appreciation. Plot devices are often rapid and erratic, skipping ahead past lengthier exposition, to keep this “action-forward” flow that focuses on trimming every inch of fat from bone. It’s not, at times, a narrative that would be allowed in more traditional Hollywood films. Straightforward video game adaptations often suffer in these moments, adding filler that’s not welcome, but Wright’s kinetic directorial signature is ideally suited for Scott’s exploits. As Kim Pine (Alison Pill) so eloquently exclaims before Scott’s showdown with Gideon Gordon Graves (Jason Schwartzman) at Chaos Theater, “WE ARE SEX BOB-OMB, AND WE’RE HERE TO WATCH SCOTT PILGRIM KICK YOUR TEETH IN!”

So are we, Kim. Wright understands this. Many other filmmakers wouldn’t be able to keep up with the whip-quick, wit-heavy forward momentum of Wright’s Scott Pilgrim Vs. The World. Luckily, this is where Mr. Wright excels.

Due to the success of Christopher Nolan’s Batman run, comic book adaptations - and eventually all subgenre adaptations - chased that oh-so-prestigious “dark, gritty” reboot allure. With Scott Pilgrim Vs. The World, Wright reminds us that both video game and comic book adaptations don’t have to conform to reality’s “grounded” approach. It works for some films! For others, well...could you imagine all the backlash over the film’s still-debated romantic themes without the more fun-filled reasons to watch like ghostly gothic demon dancers or fireball attacks or Thomas Jane and Clifton Collins Jr. as vegan policemen with finger-laser blasters? When deep voices, darkened monochrome cinematography, and “serious takes” defined superhero and fantasy adaptations alike, Scott Pilgrim reminded viewers that it’s alright to embrace the absurdity of boundlessly ridiculous mediums. Sometimes playing ninja-themed Dance Dance Revolution knockoffs can convey far more about a character’s mental state than another generic indie monologue.

Michael Cera’s performance is essential in selling Scott’s universe as it exists: absurd, accepted, and inescapable. The way he forfeits to the parade of Ramona Flowers’ (Mary Elizabeth Winstead) ex-boyfriend challengers escapes an overused setup where Scott questions what’s happening and wastes time, not believing his predicament. Instead, it’s a fist-first lunge into brawls that are punctuated by score totals for each victory and coins left behind when competitors disintegrate into binary dust. The comedy of unconformity is Cera’s asset, as the sad-sack, lovesick Scott trudges through his emotional journey as we watch character attributes climb in grade on the screen.

Nonetheless, visual comparisons to playable fighting games support my point with outright clarity. Scott Pilgrim Vs. The World is essentially a pop-punk Mortal Kombat or Street Fighter adaptation, complete with furious combos and grandly staged combat zones (arguably better than either film adaptation mentioned). As Scott fends off Lucas Lee’s stunt crew goons (Chris Evans lookalikes), skateboards are broken over backs while Cera’s stuntman pulls off some high-flying combat techniques. When Sex Bob-Omb must duel against the Katayanagi Twins, stage mechanics take over with awe-inspiring magnitude as anime avatars are summoned from both bands’ amplifiers. Where other films work harder to represent themselves “as cinema, not a video game,” Wright works smarter while achieving the opposite effect.

Scott Pilgrim Vs. The World not only runs rich with the same DNA as Konami, Midway, Square Enix, and countless other gamer brands, but is helmed by someone who deeply respects video game culture. A man who needed to remove any console from his home because his love for virtual entertainment was teetering on levels of obsession. From Mr. Wright, and I quote, "At some point, I had what I can only call a troubled couple of months on Resident Evil 2 and Tomb Raider 3 – and [the PlayStation] had to go.”

The more I dwell on Scott Pilgrim Vs. The World, ten years later, the more I’m finding newfound appreciation for a title I already adore. You’ll be hard-pressed to find a speedster narrative that better earns its most impactful beats without overwhelming audiences with Sega or PlayStation nods. Edgar Wright is more prone to editing cuts than Jason Voorhees with a machete, but it works when your film's pace is often in a full-out sprint even when characters are interacting amidst the most mundane of house party purgatories. Wright’s vision explodes with bombastic vitality and adapts an inherently video-game-centric property in a way previously thought to be unadaptable.

Maybe, just maybe, we can let our video game movies still be video games on-screen (Sonic The Hedgehog, a recent positive example)? That’s the biggest lesson learned from the champion of this subgenre (outside of “bread makes you fat”). Video game movies are always best as a marriage of mediums, not when filmmakers demand to approach adaptations like cinema is somehow more esteemed than video games. Why squander the gift of endless creative freedoms by opting for a restricting, closed-box approach? Scott Pilgrim Vs. The World sure doesn't, and it's still the main headliner of any venue it brings down.