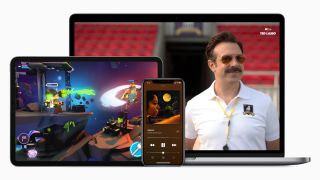 If you're all in on Apple's products and services and want to make life just a little bit easier, the new Apple One bundle might be just the thing. Just announced and coming "this fall," the bundle comes in three flavors (and price points), with a mix of Apple services. For our purposes here, that also lumps in Apple TV+.

Here's how it breaks down:

Each of the plans includes a free 30-day trial. The Individual plan saves $6 (instead of buying all of those services separately), and the Family plan saves $8 a month. Premier will save more than $25 a month. And customers who pay via their Apple Card will get 3 percent cash back.

The lone new service included with Apple One Premiere is Apple Fitness+, which is coming later this year. It's built exclusively for Apple Watch and "intelligently incorporates metrics from Apple Watch for users to visualize right on their iPhone, iPad, or Apple TV, offering a first-of-its-kind personalized workout experience."