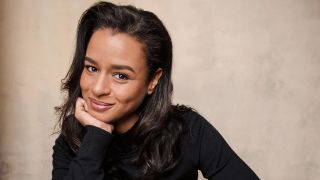 Sarah Cooper is getting her own variety special this fall on Netflix. (Image credit: Netflix)

Netflix today announced Sarah Cooper: Everything's Fine, from the author and comedian who has become a much-watch on TikTok and the other social platforms thanks to her hilarious performances of a certain president of the United States.

The variety show will be "full of vignettes dealing with issues of politics, race, gender, class, and other light subjects."

No names yet, but Everything's Fine will have "a fantastic array of special guests who will participate in short interviews, sketches and more shenanigans."

The special will premiere sometime this fall, Netflix says, and it will be directed by Natasha Lyonne. Maya Rudolph, Danielle Renfrew Behrens and Lyonne will executive produce.

Before bringing new life to old presidents, Cooper was a writer and correspondent on the CBS All Access pilot Old News. She's also the author of "100 Tricks to Appear Smart in Meetings" and "How to be Successful Without Hurting Men's Feelings."

This week she served as guest host on Jimmy Kimmel Live.