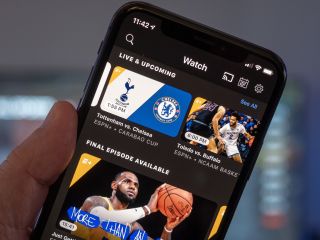 One lingering question for the future of streaming television is when ESPN might be available as a direct-to-consumer product. There are plenty of people who would love to cut out all other subscription services — if only there was some way to subscribe to ESPN on its own.

Currently, you can't do that.

ESPN+ is a fine complement to any television scheme, whether it's streaming or something more traditional. (It now has 8.5 million subscribers.) But it doesn't get the best sports available. Those are saved for the networks, and for ESPN itself.

And that's a situation ESPN and Disney executives have no doubt had to tackle for quite some time. (It's also been a bit of a sore spot, because cord-cutting hits Disney across a bunch of different brands, and not just ESPN. Such is life when you own as many properties as Disney does.)

It's also a question that came up again on Aug. 4 in Disney's third-quarter earnings call.

Asked Barclays' Kannan Venkateshwar: "Is there an alternative world where ESPN could go direct to consumers?"

Disney CEO Bob Chapek started his answer exactly how you'd think he would — by extolling the importance live sports play in the overall scheme of things.

"On a macro level," he said, "I think we understand the value of live sports. ESPN is the strongest brand in sports, and sports continue to be a driver of viewing interests. I think it's evidenced by the fact that sports accounted for over 90 of the 100 most viewed telecasts on broadcast and cable in 2019."

"So," Chapek continued, we've got a really strong position from a brand standpoint in a market that consumers love. So then the question is how do we get it to the consumer?"

Good question, Bob. Because a lot of people would love to just pay for ESPN and call it a day.

"We've looked at everything," Chapek said. "And when we think that we've got the most effective way to maximize shareholder value from the brand, the way we are right now. But as that changes over time, we're certainly open to any and all options in terms of how we'll be available to get our programs out to our consumers."

On one hand, that's very much a non-answer. Of course Disney has looked at offering ESPN as a standalone product. And so far, it hasn't found a business reason to do so. Offering ESPN by itself wouldn't "maximize shareholder value from the brand" — and that's the name of the game.

But Chapek closed with what either is a friendly nod to an analyst in the business — or possibly could be the briefest glimmer of hope for those who just want their a la carte sports.

Does that mean ESPN might someday soon be available as a standalone subscription? There are a lot of moving parts there, certainly, given all he live sports ESPN covers — college football, NFL, baseball, basketball — those are all separate deals that have to be done.

So it's not impossible, sure. But is it likely? We'll just have to wait some more.