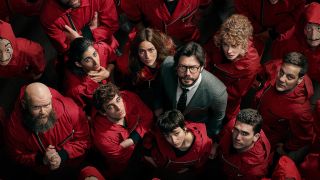 The Professor and the gang from "Money Heist" will be back for one more score in Part 5. (Image credit: Netflix)

Netflix today announced that the epic series La Casa de Papel (that's "The Paper House" in Spanish, but the series is known as Money Heist in the United States) will come to a conclusion with a fifth and final season. Or "Part 5," if you will.

Production on the final 10-episode journey will begin on Aug. 3. No word on when to expect release, but sometime in 2021 is a pretty good bet.

The series started its life with the story of the perfect robbery of the Royal Mint of Spain. It wasn't a quick smash-and-grab job, though, and things quickly started to go bad for just about everybody. Led by "The Professor," the gang found itself not just facing off against the police, but also against itself.

The series — the brainchild of Alex Pina, who also helmed the excellent White Lines on Netflix — has had a large ensemble cast throughout its run, which began in May 2017 on Spanish network Antena 3. It made the leap to Netflix in December of that year, and Part 4 was released in April 2020.

"We've spent almost a year thinking about how to break up the band," Pina said in a press release. "How to put the Professor on the ropes. How to get into situations that are irreversible for many characters. The result is the fifth part of La Casa de Papel. The war reaches its most extreme and savage levels, but it is also the most epic and exciting season."