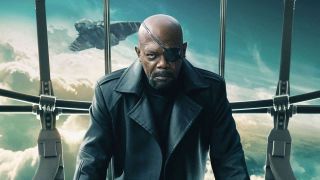 Going into a new Disney+ show that features Samuel L. Jackson's Nick Fury with absolutely no information on it is actually pretty fitting when you think about it.

Here's the gist: Variety is reporting that a new series that will feature Nick Fury in one way or another will be headed to Disney+ at one point in the future. Disney, Marvel, and Samuel L. Jackson's reps have all declined to comment on the situation, but a Variety exclusive is a Variety exclusive.

Because no one's commenting, and because their sources likely didn't know much else about the project themselves, we're not sure what any of the details will be. Could be that it's a new S.H.I.E.L.D. adjacent series that brings the Director back into play to help rebuild what's been shattered. Or it could be something not-at-all related to that and Nick Fury just happens to pop in from time to time. We have the same amount of questions you do!

What we do know is the last known whereabouts of Fury was aboard a Skrull ship after the events of Spider-Man: Far From Home. That could mean some interesting Skrull-related content for this upcoming mystery series, or it could mean nothing at all! Maybe it'll be a begrudging buddy series between him and the Flerkin.