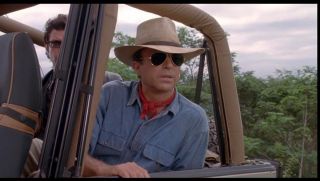 So, here's the thing. I, Amelia Emberwing, entertainment witch here on What To Watch, am obsessed with Jurassic Park, dinosaurs, and any of the like. I say that because I want you to understand that my goal here isn't clickbait. My goal here is to show individuals who also whisper "dino" with reverence every time they see a dinosaur a picture of an old friend.

Are you ready? Ok, here it is.

Over the weekend, when Sam Neill announced he was finally making the journey to the set, I got goosebumps. It's such a weird, nostalgic thing. As we discussed yesterday, there's a danger to it. It's one I'm not particularly thrilled to see Neill taking, but considering how conscientious the actor's been over the virus I have hope that he simply knows more about the situation than we do.

Either way, look at the hat! Look at it! Look at that silly thing sitting on its silly hat contraption. (I'm an entertainment journalist, not a hat expert!) To a lot of folks, that hat is just a hat. But to others that hat signifies the start of a whole new adventure. All new dinosaurs, all new cloning problems... a lot of all new but also a lot of old favorites.