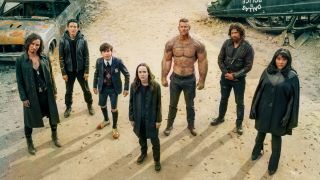 In the final issue of The Umbrella Academy: Apocalypse Suite, the first volume of the comic series by My Chemical Romance co-founder Gerard Way and artist Gabriel Ba, the world is about to end. Eccentric scientist Sir Reginald Hargreeves adopted seven infants born on the same day to women who had previously shown no sign of being pregnant, and trained six of them as child superheroes. But the most powerful, Vanya, had her sonic manipulation abilities suppressed and was ostracized by her family.

Over the course of the book, Vanya found out about her past and decided to punish her family by ending the world. She tore apart the moon, sending enough of it hurtling towards Earth to ensure humanity would meet the same fate as the dinosaurs. Then her brother Klaus saved the day with his telekinetic powers.

Before then, Klaus was only shown to have the ability to talk to the dead. A text box explains that he always was capable of moving objects with his mind, but that the scope of that power came as a surprise to Klaus and the rest of the siblings. That explainer comes across as a sloppy deus ex machina, with Way falling into one of the easiest traps in comics by just inventing a new ability to get a hero out of a situation.

Season one of Netflix’s The Umbrella Academy series also concludes with a hunk of the moon hurtling towards Earth, but the solution is very different. Vanya (Ellen Page) and Klaus’ (Robert Sheehan) time traveling sibling Five (Aidan Gallagher) whisks the family into the past in order to save them from the immediate threat and possibly help Vanya come to terms with her trauma so she won’t be driven to destroy the world. It’s a much cleverer resolution, using a power that had previously been established and setting up the show’s excellent second season where the entire family is living in Dallas in the early 1960s.

That shift is just one of many ways that The Umbrella Academy showrunner Steve Blackman has pulled off the rare feat of making an adaptation that is strictly superior to the source material. The show makes the plot more coherent and adds depth to characters while keeping much of the bizarre plot and capturing the spirit of Way’s comic.

Another prime example of the changes is found in the characters Hazel (Cameron Britton) and Cha-Cha (Mary J. Blige), hitmen in charge of protecting the timeline from the machinations of unauthorized time travelers. Their deep and complicated relationship is fraying as Hazel decides he might want to leave their violent life behind and begins working to help the members of The Umbrella Academy instead of trying to kill them. Hazel and Cha-Cha’s banter, pathos, and acts of spectacular violence are among the highlights of the show’s first season.

Yet, almost all of that was invented by Blackman and his writers. In the comics, they’re quite literally cartoonish villains, never showing the faces beneath the cartoon character masks they wear. They’re both unrepentant murderers killed by Klaus after he manifests still more abilities: the power to possess the living and survive being shot in the head. They never show any of the internal conflict or sharp humor found in their incarnations in the show, who only wear their masks when fighting – a costuming decision that better humanize the characters.

Way has only penned three volumes of The Umbrella Academy, so the writers of Netflix’s show were always going to have to invent a significant amount of content to stretch that work out into series length. But what’s really impressive is that the new material never feels like out of place padding. The writers have also made excellent decisions on what to change or omit entirely.

Much of that effort is focused on making the series less aggressively weird than the comic books it’s based on. In both versions, The Umbrella Academy’s Number One, Luther (Tom Hopper), is critically injured on a mission and Hargreeves uses science to save him. In the comics, his head is attached to the body of a gorilla. In the show, he’s injected with a serum that gives him some simian qualities like excess hair, oddly proportioned hands, and enormous bulging muscles.

The original design could have been pulled off with CGI – which still needed to be used heavily in the show’s first season to bring to life the family’s talking chimpanzee caregiver, Pogo (Adam Goldey). But the more subtle approach is still extremely off-putting without being distracting. Similarly, Vanya’s skin turns paper white when her powers are unlocked in the comic, but in the show, she just projects a white aura and bleaches her clothes as she unleashes devastation.

Blackman could have easily gone too far in the other direction, trying to make The Umbrella Academy too serious or hammering it into a more standard superhero mold. But thanks to an absolutely phenomenal cast with the chemistry to make their sibling rivalries and affections believable, Blackman and his writers have struck the perfect tone. The Umbrella Academy delves into heavy themes like abusive relationships, dealing with trauma, and racism while also having fun with playful banter, absurd scenarios, and charming music numbers.

The comic series was a side project for Way, but in the show, he can has the opportunity make use of his musical talents as well. He’s penned both the original song “Here Comes the End” and a cover of Simon & Garfunkel’s “A Hazy Shade of Winter” for the series, adding to an incredible soundtrack that brings whimsy and drama to fight scenes, shopping sprees, and the memorable scenes in both seasons where members of the family blow off some steam by dancing.

The plots of the comic and show have diverted pretty extensively by season two. The show’s writers have kept some aspects of the comic story, like parts of the family traveling back in time and getting entangled in the Kennedy assassination, but the focus on different aspects of the era and have created a host of original characters. While you might want to check out the comics to spend more time with the loveable misfits and see Ba’s often unsettling artwork, the series is mostly a testament to Blackman’s impressive ability to turn some good ideas into something truly great.