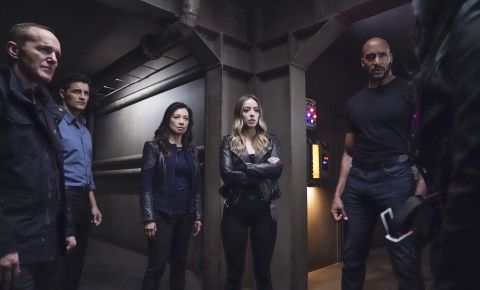 The final episodes have great ideas that should have had more room to breathe.

SPOILER WARNING: This article contains spoilers for the last two episodes of Agents of S.H.I.E.L.D.

Agents of S.H.I.E.L.D. sure has come a long way since being the uneven first foray of the Marvel Cinematic Universe into the world of television. The series has long abandoned the constraints of the film series continuity and grown into something akin to Marvel’s own little Fast and Furious franchise, with a heavy focus on family and team dynamics while facing off against high-concept cosmic threats on a TV budget. This final season has really cut loose in that respect, offering up a time-hopping escapade that used S.H.I.E.L.D. history as a sandbox, allowing the show to revive Agent Carter favorite Daniel Sousa (Enver Gnojak), and providing one hell of a hook in making us wonder what exactly happened to Fitz after the end of Season 6.

So the big question for the finale is whether it can stick the landing. Well, the answer is a big resounding… kinda. The final two episodes of the show are each solid entries for the series, but the latter of the two does end up feeling a bit rushed, leaving a lot of big ideas with insufficient room to breathe as the show catapults toward climax.

‘The End Is At Hand’ feels like the proper mission-focused episode that we’ve come to expect from the agents. Sousa, Mack (Henry Simmons), and Daisy (Chloe Bennet) infiltrate the Chronicom ship to rescue the captured Jemma and Deke. Coulson (Clark Gregg), May (Ming-Na Wen), and Yo-Yo (Natalia Cordova-Buckley) are on the ground in The Lighthouse watching as every other S.H.I.E.L.D. base around the world is destroyed by Chonicom laser cannon fire raining down from space. It’s tense, hard-hitting stuff that hits no less hard for this last season taking place in a radically different timeline from the previous seasons. It feels like the end, and there’s gravity in that inevitability.

That didn’t prevent the episode from also flexing some of the show’s strongest comedic muscles. Sousa and Mack continue to show off their humorous chemistry with an effortlessness that feels like it should have developed over years rather than just a few episodes. Jemma’s (Elizabeth Henstridge) progressive memory loss due to the destruction of her brain implant, though tragic in its own right, is played for some lighthearted gags that use her confusion to propel the plot along.

Where the episode falters is in how it struggles to organically set up its climax. Though the sisterly confrontation between Daisy and Kora (Dianne Doan) is supposed to signal a change of heart for Kora, it feels less like a pull away from Nathaniel Malick’s (Thomas E. Sullivan) abusive influence than a switch flipped so that Kora finally understands what a moral compass is. If the writers were going to go through all the trouble of redeeming resident asshole John Garrett (Bill Paxton) enough to have him teleport Coulson, May, and Yo-Yo out of The Lighthouse and into the speakeasy, they could have shuffled him off to the mortal coil a little bit less undramatically than a random agent shooting him in the head on impulse.

But hey, at least the episode ends on a high note by finally teleporting Fitz in from the quantum realm, which apparently acts as a gateway between timelines now.

It’s just unfortunate that the final episode, ‘What We’re Fighting For’, doesn’t have the pacing to comfortably convey all that it needs to in a mere forty-two minutes. It starts strong with Deke’s (Jeff Ward) decision to sacrifice himself by staying behind to send everyone else back to the original timeline along with the Chronicom army. It’s a very satisfying evolution from Deke’s previous immaturity that results in him becoming the de facto leader of S.H.I.E.L.D. in the alternate Earth.

Things start to go off the rails, though, once the episode needs to take a breather to explain exactly where Fitz has been for an entire season. The explanation that they spent years developing time travel in the far reaches of space is itself just fine, if a bit convoluted, as is the framing device of telling a story to help Jemma recover her lost memories. However, it feels like an episode all its own that was compressed as far as possible, likely due to Iain de Caestecker’s limited availability for shooting this season. Even though the ultimate payoff of eventually revealing Jemma and Fitz’s daughter puts a heartwarming bow on proceedings, it would have been nice for that plot to serve as more than a last-minute twist.

Thankfully, most of the rest of the agents get a real signature moment to shine, from Coulson smugly outwitting Sibyl (Tamara Taylor), to May fully embracing her empathetic powers to convert to invading Chronicoms into creatures with the capacity for friendship, to Mack getting to hold the shotgun-axe one last time. Even Kora, as ambiguously defined as her energy-based powers are, finally embraces Daisy’s influence and turns uses her powers against the Chronicoms.

It’s such a shame, then, that the confrontation between Daisy and Malick falls a bit flat. It’s supposed to feel like a big climactic quake-powered mirror match with the season’s big bad, but the fight mostly consists of the two waving hands at one another with minimal fight choreography, and Daisy’s apparent self-sacrifice feels pretty meaningless when Kora almost instantly revives her in the aftermath.

The finale shines brightest is in the final ten minutes, which just involves the main cast sitting in a holographic space together one year later, reminiscing and saying goodbye one last time before the credits roll. Though the contrivance that everyone survives and is just too busy to stage a coordinated reunion is a pretty weak loophole in Enoch’s prophecy that the team would never be in the same room again, it’s nice to get a chill moment that gives everyone’s character some much-needed closure. Frankly, this should have been the majority of the final episode, with focus on action relegated to the first act to tie things up.

So the finale of Agents of S.H.I.E.L.D. is far from perfect, but that’s a far cry from saying that it was a bad ending. On the contrary, I like most of the ideas and plot beats it presents, but it feels like it should have been presented over three or four episodes rather than crammed into two. But even if the final steps falter, I’m very happy to have stayed with this show for seven ridiculous seasons.

You can watch the final season of Agents of S.H.I.E.L.D., including the finale, now on Hulu.