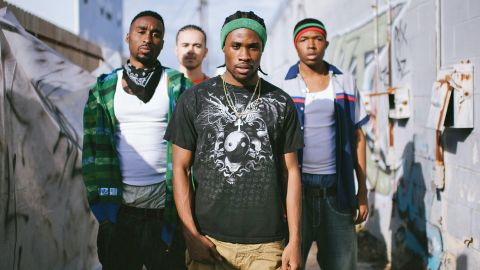 RZA undercuts inner-city crime cliches with a story passionate and knowledgeable about the history of New Orleans' underprivileged, underserved communities.

Crime thrillers often emanate the heat of vengeance or retribution - reclaiming something lost, or deserved - but RZA’s Cut Throat City, set in the 9th Ward of a post-Katrina New Orleans, simmers with unique, righteous anger.

There’s no real cleverness to the heist that sets the wheels of its story in motion; the moneyed and privileged against whom its amateur thieves conspire are too powerful to target with any specificity, much less impact. But even if ambition undermines his focus in Cut Throat City, RZA offers a singularly compassionate look at people marginalized, forgotten about and forced into acts of desperation in a city that feels itself like an unsolved crime scene against them, and with far greater and lasting stakes. An impeccable ensemble cast further elevates and enhances a potentially familiar movie scenario with a razor-sharp cultural perspective and deeply lived-in sense of the history of the city and its people.

Shameik Moore (Spider-Man: Into the Spider-Verse) plays Blink, a Tulane graduate and aspiring cartoonist living on the eve of Hurricane Katrina in New Orleans’ 9th Ward with a baby girl whose mother, Demyra (Kat Graham, All Eyez on Me) he’s about to marry. His best friends Andre (Denzel Whitaker, Black Panther), Miracle (Demetrius Shipp, All Eyez on Me) and Junior (Keean Johnson, Alita: Battle Angel) give the couple a happy celebration that the realities of an impending tropical storm and an inhospitable job market can’t sustain. Despite Blink’s talent, white gatekeepers misunderstand and dismiss his art, forcing him to consider abandoning a means of expression that has become an outlet, even his lifeblood, in an area seemingly too devastated, both by the hurricane and an indifferent federal response to the disaster, to repair.

Exasperated by poverty and despair, Blink turns to his ‘cousin’ Bass (T.I., Ant-Man and the Wasp) for guidance on a casino robbery that will earn him and his friends some cash, and just maybe exorcise a few of their frustrations about the state of their community. But even after the robbery ends in tragedy, they discover a bigger problem looming on the horizon: the authorities publicly report hundreds of thousands of dollars in cash that they did not steal, and now Bass wants a cut of something that doesn’t exist. In the meantime, a frustrated local politician and former police officer Jackson Symms (Ethan Hawke, First Reformed) reaches out to squeeze Lucinda Valencia (Eiza Gonzalez, Baby Driver), the detective on the case, into solving it expeditiously, hoping to preserve property values and repair the public image of a district - and its police - as it becomes increasingly besieged by crime.

As far away as audiences are from the watershed honesty of Boyz n tha Hood, John Singleton’s South Central crime story established more than a few conventions for what has become a genre unto itself, most notably a divide between poor black teenagers with foundations in school, and others in the street. Working from a script by Paul Cuschieri (TV’s The Undercovers), RZA circumvents and even partially redefines these archetypes, most skillfully by showcasing how little differences there are between the characters we’d traditionally define as “good” and “bad.”

Blink is gifted, educated, and angry, seeking work that not only pays for him to raise a family, but affords him an opportunity to be creative, and his turn to crime feels palpably like an act of desperation after exhausting other avenues. Meanwhile, Miracle harbors aspirations to rap, but he’s a feckless drug dealer living out of his car, and his dreams of criminal glory are dashed almost as soon as they form in his head. (The fact that Shipp played Tupac in All Eyez on Me, and Shakur starred as the explosive, charismatic Bishop in the seminal Juice, lends a haunting quality to the actor’s performance in a role that could similarly been flashier.)

A revolving door of supporting roles and cameo performances from Rob Morgan (Just Mercy), Isaiah Washington (The 100), Wesley Snipes (Dolemite is My Name) and Terrence Howard (Empire) provides a vivid counterpoint to the youthful fury that drives the four young men at the heart of the story. Moreover, their lived-in wisdom - some cynical, some spiritual, some corrupt - frames the options inherited by the characters they would mean to advise and sometimes control, but also the up-and-coming actors seeking to tell authentic, engaging stories about communities of color. Meanwhile, the few female roles are peripheral, but integral to the story: Graham’s Demyra exudes the calm certainty of a life partner who’s witnessed adversity but is determined not to let it undermine her family, while Gonzalez’ Detective Valencia polices with a compelling combination of tenacity, judiciousness and empathy.

Unfortunately, RZA’s developing gifts as a director eventually lose their grip on a story with too many moving pieces to keep aligned, particularly once the concentric circles of indifference, corruption and criminality become a Venn diagram trapping the four main characters in the space where they overlap. But even if neither a surprising turn or tacked-on coda quite alleviates the story’s - and New Orleans’ - lingering sense of irresolution, RZA’s third film exudes a deep, sometimes painful knowledge of culture and community that bleeds into every choice, and every scene. Cut Throat City doubles as the name of Blink’s endeavor as a cartoonist and comic book artist; its story - and the one the characters live to inspire his pages - offers a fitting origin for a saga worth revisiting, and extending.

Cut Throat City will be available to stream on Netflix August 21st.