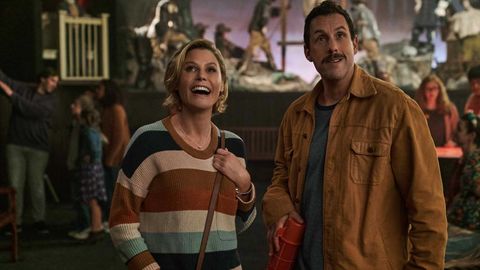 Adam Sandler's latest is another featherweight comedy focused on his familiar shtick, but it fails to add up to something funny, scary or interesting.

In Hubie Halloween, there’s a scene where Tim Meadows is dressed as a headless body holding its own head, and he starts an extended maniacal laugh that makes the fake hands bounce wildly in front of him. It’s not particularly a good sight gag, but I imagined director Steve Brill coaching him through the moment, encouraging Meadows to keep going with the guarantee that “it would really play on camera.” This is one of only two times I can remember laughing in the film.

Back during the 2019-2020 awards season, Adam Sandler promised that he would deliver a truly abysmal film in response to the absence of acclaim that he received for Uncut Gems (though technically, he did win an Independent Spirit Award, which he called “the Best Personality awards of Hollywood”). Hubie Hollywood is that film. It’s admittedly not as heinous as the Grown Ups movies, which essentially ask audiences to pay to watch Sandler and his friends on vacation. But Brill seems perfectly content to revisit bits that Sandler did decades ago - and weren’t funny then - in the service of a bland, noisy comedy about a 54-year-old virgin who’s obsessed with Halloween but terrified by absolutely everything he encounters. Meanwhile, a handful of callbacks to Sandler’s earlier films Billy Madison and Happy Gilmore do nothing but remind viewers what lighting those films’ directors caught in a bottle, now replaced by a lightning bug trapped in a jar with too few air holes.

Sandler plays the Salem, Massachusetts-based title character, who like Bobby Boucher and Little Nicky before him, possesses and unspecified speech impediment and regularly endures pranks, hazing and even acts of violence from his fellow citizens. A grown-up hall monitor with nothing to patrol, Hubie’s first love is Halloween and his second is Violet Valentine (Julie Bowen), both of which absolutely terrify him. But when a mysterious new neighbor Walter (Steve Buscemi) moves in next door, insisting that Hubie ignore the strange noises emanating from his home, Hubie’s suspicions are kicked into high alert, prompting him to assume responsibility of protecting the whole town from any holiday-themed shenanigans, whether by Walter or the junior high kids buying toilet paper and eggs in mass quantities.

In the course of Hubie’s investigations, he runs afoul of his former high school classmate Steve (Kevin James), now turned chief of police, Mr. Landolfa (Ray Liotta), a businessman who enjoys bullying Hubie, and Father Dave (Michael Chiklis), a local priest exasperated by Hubie’s antics. Even his mother (June Squibb) encourages him to fight back against the many people who seem to hate his guts, but Hubie continues to turn the other cheek. But when townspeople start disappearing under mysterious circumstances, Hubie finds himself in the unique position of being the only person who knows that something’s going badly wrong. Unfortunately, he’s cried wolf too many times in the past, and now he must convince town leaders and even his enemies to listen to the mounting evidence that there’s a murderer on the loose.

Sandler wrote Hubie Halloween with his longtime partner Tim Herlihy, and they pepper the film with callbacks and references to characters from his earlier films, such as Hal L., the nursery home orderly played by Ben Stiller in Happy Gilmore - again played by Stiller in a brief cameo. Bowen played Sandler’s love interest in that film as well, though 25 years ago her character was (appropriately) more skeptical of the character he portrayed. Meanwhile, the rest is cribbed from every script they’ve ever written together, with Sandler using a weird accent he decided was funny 30 years ago to deliver lines that are so mechanical and transparent that calling them purely expository is an understatement. No joke lasts more than a few seconds and none build to something bigger, better or more elaborate; every scene offers an impatient showcase for anyone and everyone involved to riff, improvise, or throw in a random goof in the hopes of distracting viewers from the realization that there’s virtually no plot, and what does exist is telegraphed like it’s been hit by Happy Gilmore’s driver.

All of which is to say, this film is pretty much exactly like its predecessors, except the relative novelty of Sandler’s stardom has worn off, he’s proven that he can really act, and there are people making clothes hanger comedies like these much better now. I suppose I understand why Sandler would want to keep making movies like this - they can’t cost much, co-star all of his friends, they’re an easy lift creatively, and they make decent money - but when he started making movies, they were engineered for immature teenagers, and now 25 years later, they still are. So if you have literally grown up watching Adam Sandler, then you now are an adult, and new movies that do the same stuff as old movies that once made you laugh are just not funny, certainly not in the same way. And Hubie Halloween is, for better but mostly worse, funny in the same way as Billy Madison, but with the added baggage of a quarter century, dozens of imitators and copycats, and your own maturity battling against its freshness, originality and humor.

The only thing that vaguely constitutes originality is the new additions to Sandler’s expanding repertoire of comedians and co-stars, and that’s mostly baffling rather than gut-busting. Ray Liotta has a few fun moments as a businessman enjoying his Halloween who has to keep remembering he buried his father that same morning. And always-reliable Maya Rudolph gets the film’s only other laugh, when she offers a very dramatic but nonsensical reason why she’s spent decades hating Hubie. But so many jokes seem to exist almost as a dare, like a Catskills comedian letting you know how overused and unoriginal their bit will be and the defying you not to chuckle when he trots out the punch line. Is that comedy? I guess.

Ultimately, the big obstacle to get over is not that the movie’s unoriginal by Adam Sandler or even lowest-common-denominator standards, but that it feels like it couldn’t be that hard just to be an ounce funnier or smarter or more sensitive. Sandler’s characters always attract an unlikely love interest, but Bowen’s Violet is starry-eyed and giddy about Hubie from the first scene in a way that doesn’t just strain credulity, it seems absurd - without even taking advantage of the fact that her attraction could literally be a joke! There are just too many possibilities to explore in each scene, and somehow Sandler, Brill and company always choose the path of least resistance - and least payoff. Or maybe I’ve just outgrown the comedic Adam Sandler and want to see more of the Uncut Gems Adam Sandler, or the Punch-Drunk Love Sandler where his tenderness masks an emotionality that can be funny but also deeply affecting.

In which case, Hubie Halloween is lousy, but it’s also pretty clearly not for me. I mean, sure, I enjoyed that momentary laugh when Tim Meadows cackled, his fake hands shaking in front of his face. But the only way that translated during the rest of the film was when I sat on my couch, head held in my real hands as I shook in disbelief.