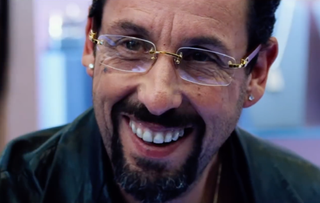 Adam Sandler is perhaps one of Hollywood’s most polarizing yet prolific leading men. He holds the title of having the second-highest Golden Raspberry nominations (second only to Sylvester Stallone) yet proudly took home a multitude of Best Actor awards for his role in Uncut Gems - and his snub at the Oscars was one of the biggest stories of 2019. That isn’t to say criticisms of Sandler’s films aren’t without merit, considering there’s a lot of childish, tasteless, and downright bigoted “jokes” scattered throughout his filmography. And yet Sandler’s films are so popular, Netflix can’t greenlight them fast enough. Here are ten of his very best.

In the middle of a string of arguably the most sophomoric and downright terrible films of his entire career (I’m looking at you, I Now Pronounce You Chuck and Larry and Jack & Jill), Sandler starred alongside Seth Rogan and Leslie Mann in the dark comedy/drama, Funny People. Sandler had already proven that he could hold his own with more serious material, but this blending of serious themes with genuinely solid humor and a star-studded cast gave us one of his strongest performances.

Critics hated this film upon its release, but it has since developed a very vocal and rabid cult following. A few seasons into his role at Saturday Night Live, Sandler stars alongside Steve Buscemi and Brendan Fraser as a lame rock band who hijack a radio station in an attempt to play their demo in the satirical 90s favorite. This is one of the few showcases of Sandler playing a legitimate supporting role (compared to his leading roles and countless cameos), and offers a glimpse into the comedic talent that would later dominate the rest of the decade.

Never in my wildest imagination would I believe I’d get misty-eyed during an Adam Sandler comedy, but here we are. The fantasy-comedy was billed as another slapstick “ha ha Adam Sandler does funny things” vehicle, but instead we got a comedy film dripping with existential turmoil and heartbreak. It’s a fair criticism to say the juvenile humor takes away from the heart of the story, but watching Sandler switch between his usual schtick and genuinely sincere moments of sorrow is truly impressive.

For someone with a history of performing as zany and ridiculously as Adam Sandler in live-action settings, it makes perfect sense that he’d lend his voice for one of the biggest animated franchises of recent memory. Sandler stars as Count Dracula, legendary vampire and proprietor of the titular Hotel Transylvania where monsters come to relax and escape from the pesky world of humans. Sandler’s arsenal of voices are all on display, and he brings a weirdly charming dad-vibe to everyone’s favorite fangbanger.

The last Netflix film to ever screen at the Cannes film festival (where it received a four-minute standing ovation), Noah Baumbach’s The Meyerowitz Stories blew audiences away, namely due to the excellent performance from Adam Sandler. He plays a man named Danny Meyerowitz, the personification of who Adam Sandler very well could have become had he not reached superstardom. He commits with every cell in his body to this performance, and turns the idea of Sandler as a festival darling into a reality.

From the mid 90s to the turn of the new millennium, Adam Sandler was a comedy god. Fresh off the heels of “Adam Sandler does funny voices” movies like Little Nicky and The Waterboy, Sandler tackled his first serious role in Paul Thomas Anderson’s Punch-Drunk Love. Removed from the gimmicks that made him a star, Sandler showed his true capabilities as an actor and held his own alongside Royal Shakespeare Company graduate, Emily Watson.

One of the most quotable movies of all time, Adam Sandler’s absolutely iconic performance in Billy Madison popularized the art of manchild comedy and permanently changed the landscape of comedic blockbusters forever. Considering Sandler spends a huge chunk of the movie hanging out with kids roughly 25 years his junior, the childish humor feels right at home. It’s a tour de force of rauch-com weirdness, and for Sandler’s first leading role, it’s one hell of a calling card.

Look, I’m just going to come right out and say it--The Wedding Singer is one of the greatest romantic comedies of all time. Period. The onscreen chemistry between Adam Sandler and Drew Barrymoore deserve to go down in cinematic history along the likes of Tom Hanks and Meg Ryan or Richard Gere and Julia Roberts. The Wedding Singer has Sandler’s immaturity dialed down, finally allowing his comedic chops to shine without any distraction. He’s funny, endearing, and help me if “I Wanna Grow Old With You,” isn’t one of the most perfect love songs ever written.

If Billy Madison is Sandler’s introduction of absurdist and foolish sense of humor, Happy Gilmore is where he perfected it. Over 20 years later, this fish-out-of-water story featuring Sandler as a failed hockey player turned ace golfer is still as quotable and memorable as it was during its release. This is a movie filled to the brim with so much silliness it shouldn’t work, and yet somehow, it does. The rivalry between Sandler’s Gilmore and Christopher McDonald’s Shooter McGavin is a masterclass in comedic conflict, but the moments of kindness Gilmore shares with his grandmother (Frances Bay) keeps the movie grounded and full of heart.

Adam Sandler in Uncut Gems deserved the Academy Award for Best Actor over that Taxi Driver rip-off in clown makeup. There, I said it. The passion and dedication Sandler brought to the role of Howard Ratner was unlike anything he’d ever done before, and was one of the most flawless executions of an anti-hero ever committed to the silver screen. Ratner is a horrible person who makes even worse decisions, and yet Sandler found a way to make every single person in the theatre crawl to the edge of their seat with nothing but hope that this character comes out on top. Every moment he appears on screen is absolutely captivating, and we can only hope this isn’t the last we’ll see of a performance like this one.