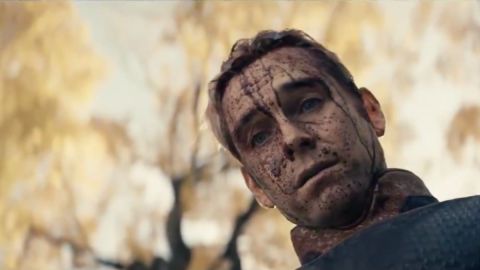 "The Boys' has blown the bloody doors in its season finale, finding ways to honor the development of characters who, at one time, might have seemed like lost causes.

This post contains spoilers for The Boys.
Check out our last review here.

As The Boys takes its Season 2 bow, conflict brews within this critic first, fan second. Mysteries beget answers, justice triumphs, and bleakness sustains. America’s favorite zap-happy white nationalist is exposed, Homelander (Antony Starr) loses visitation rights to his supe-in-training son, and the serial head-popper has a name. One that I don’t want to deal with right now. Can’t we have a single good thing in The Boys? [Contemplates our society’s real-time moral decay.] Oh, right.

“What I Know,” in proper finale format, is always driving towards a climactic confrontation between Butcher’s (Karl Urban) faithful, Stormfront (Aya Cash), and Homelander. When we regroup in Butchers’ now-familiar crack den hideaway, violence seems like the only answer. Frenchie (Tomer Capon) waves his homemade pulse cannon that’ll puncture Stormfront’s skull, while Mother’s Milk (Laz Alonso) fills syringes with enough adrenaline to burst A-Trian’s heart. All bets are off, storm the castle, kill the gaslighting, master race abiders serving as king and queen. Unless, as proposed by Starlight (Erin Moriarty) and Hughie (Jack Quaid), and end-all witness can topple Vought International. Butcher grants them a tight deadline. Off to the races.

Hughie and Starlight arrive at Queen Maeve’s (Dominique McElligott) flat, hoping to swing The Seven’s favorite LQBTQ+ token. Maeve’s answer is “no,” and her reasoning is concise: “I’m tired.” Maeve is the forgotten. Maeve is every once-hopeful voice that kept clinging to the idea that things could get better, now exhausted by a life of nothing but let-downs and betrayals. Hughie pushes. “We’re all tired, but [Vought is] hurting people, and sooner or later they’re going to hurt someone you love.” The sight of a broken superhero, powers and all, gets worse when Maeve’s aggression chases Hughie and Starlight away. This beacon if invincibility is unable to save herself, let alone the world. Good thing A-Train (Jessie T. Usher) has a vendetta against Stormfront - the whole racism thing - and he drops photographic evidence of Stormfront’s Nazi ties into Hughie and Starlight’s lap.

A smoking gun with Goebbels’s face plastered in view. With a click of the mouse, Stormfront’s supremacist background and genocide intentions are exposed. Who's the meme now? I believe we can all echo A-Train’s sentiments, when he so eloquently remarks, “Fuck that Nazi bitch.”

Before Butcher can call Homelander some iteration of “cunt” to his face, Homelander and Stormfront’s location needs a pinpoint. Remember, they also still have Ryan (Cameron Crovetti). Homelander’s trying to play parent of the year, which results in failed bonding at Planet Vought (Planet Hollywood, but supes) but then a tender heart-to-heart when Homelanders promises to be the guiding figure his scientist caretakers never were. For a brief second, Homelander flashes genuine compassion and empathy towards another being, and we believe his sincerity. Then it’s outside to practice Ryan’s laser eyesight, where Stormfront urges Ryan to picture someone he hates, because “bad guys want to hurt us because of the color of our skin.” Ope. The crazy Nazi immortal says the quiet things out loud, to a child, as a brainwashing tactic. At this point, all I could think about was relishing her fingers-crossed excruciating death at the hands of Butcher, or Kimiko, or anyone else sick of watching this pompous representation of our current government leaders.

Now, here’s the moment we expected.

Butcher organizes a meeting with Stan Edgar (Giancarlo Esposito) to discuss collaborative benefits. Butcher agrees to hand Ryan over to Vought International in exchange for Becca (Shantel VanSanten). He calls Edgar ruthless, amidst negotiations to secretly offload his estranged wife’s superhero lovechild without remorse. Butcher hates supes, hates Homelander, and by Ven Diagram rules, we assume Butcher hates Ryan. Edgar agrees, purely from a business standpoint, which he reminds Butcher, is the basis for every decision made throughout history. He says, calmly eating gruyere puffs and sipping an afternoon beverage like it’s Tuesday, not the day he’s hiring outside help to bruise Homelander’s ego.

Everything goes according to plan. Stormfront is outed to the nation as the boot-stepping manipulation maestro she’s been since Liberty. Homelander and Ryan are separated when Frenchie blares a piercing frequency that pulls Homelander from their cabin (where Doppelganger once played dress-up), and Becca nabs her frightened child. Then it happens. Butcher, the bastard, the commanding anti-hero, puts Ryan and Becca in a car with Mother’s Milk, aimed at freedom. He confesses his barter with Edgar, spills his intentions to Becca’s face, but she doesn’t retaliate. Becca sees the man Butcher is, under the bristly black facial scruff and perpetual crankiness, and maybe Butcher does as well.

Then Stormfront tosses the escape vehicle like a Matchbox toy, and it’s throwdown time.

With their male teammates wasting bullets as a mere distraction, Kimiko and Starlight charge at Stormfront, as the lightning slinger shocks her opponents into oblivion. Homelander’s help isn't required. Stormfront snaps Kimiko’s neck, hurls Starlight, and practically laughs when approaching Hughie and the other mortals. That’s when Maeve shows up. “Hey, Kraut.” Newfound adrenaline surges through Starlight and Kimiko, who join Maeve for some empowered shit-kicking à la Kurt Russell getting worked over at the end of Death Proof, complete with some “Cherry Bomb” adjacent punk tunes in the background. Stormfront escapes, chasing after Becca, Butcher, and Ryan, who scampered away, but it’s still so goddamn fulfilling. To quote Frenchie, mocking Vought’s insincere slogan, “Girls do get it done.”

Stormfront, visibly battered and weakened, catches Butcher in the woods. She sets her focus on Becca, to eliminate Ryan’s “oppressive” mother. Stormfront strangles Becca, Butcher bashing on her back with a crowbar with zero reaction. At this moment, Ryan lets out a blast of redness from his eyes that severs Stormfront at the knees, roasting her flesh and leaving behind what’d look like a Barbie that fell into a pyro-happy little brother’s torturous possession. Unfortunately, Ryan’s first expulsion of optical weaponry catches Becca in the jugular. She bleeds out in Butcher’s hands, as she begs the heartbroken, fuming-mad mercenary to ensure Ryan knows her passing isn’t his fault. Butcher grabs the crowbar and looks at the sobbing child, and then at a gore-covered Homelander dropping altitude.

Without Homelander's arrival, I wonder if Butcher would have fruitlessly attacked Ryan. In this case, America’s favorite monster insists Ryan comes to daddy. Instead, the orphaned boy slowly shuffles behind Butcher, who stands between Homelander and his son.

Alas, no fractioned war ensures. Humans wouldn't stand a chance. Also, The Boys isn’t a Brightburn sequel. Maeve once again interrupts certain doom, and produces the airplane video where Homelander abandons an entire cabin full of passengers to perish. Should Homelander not leave Ryan, Maeve, and Starlight alone henceforth, the footage would become public knowledge, and the world would see their savior as the ugliest, morally bankrupt villain. Homelander can’t lose his adoring fans, so he flies away, later seen yanking his little ‘lander atop New York City’s tallest building, overlooking the skyline, silhouetted against the moon’s piercing glow while repeating, “I can do whatever I want.” The fragility of male complexes, in its man-babiest form.

“What I Know” never becomes the all-out war. Butcher’s squad never mirrors the comics and injects themselves with Compound V, which is no longer going to market thanks to Stormfront’s exposure. Blackmail rules the day, but “The Boys” are given their moments to breathe. Butcher fancies himself a father figure when imparting his wisdom (“don’t be a cunt”) and Becca’s protective St. Christopher necklace before passing Ryan into Mallory’s (Laila Robins) care. Frenchie and Kimiko embark on their most important mission yet: go dancing, enjoy one another’s company. Mother’s Milk hugs his family, pardoned from paranoias. David defeats Goliath, using nothing but wits and courage and impossible grit. Maeve refuses to roll over, and Homelander? Gaze upon the architect of his own demise. Action beats deliver the excitement, but Season 2 culminates with care paid towards character evolution, humanity’s prevailing graces, and a dump truck load of due comeuppance.

Oh, and then Victoria Neuman (Claudia Doumit) is outed as the brain exploder.

That’s right. The Congresswoman challenging Vought International tooth-and-nail, corroborating with Mallory’s superstars, is the same supe who slaughtered Susan Raynor (Jennifer Esposito), Shockwave (Mishka Thébaud), Jonah Vogelbaum (John Doman), and other high-profile targets. Right, wrong, someone is always playing dirty. We find out when Neuman splatters Alastair Adana (Goran Visnjic), Church Of The Collective leader, all over his office after a phonecall where Alastair requests tax exemption in exchange for more dirty files like Stormfront’s. Neuman plays nice on the phone. “You’re one of the good ones,” chuckle’s Adana. Then his melon bursts (sloppily) in synchrony with the tab releasing pressure from his Fresca can as the lip pops.

Cut to Hughie entering Neuman’s office in search of a job, somewhere he can fight Vought and not get covered in organs, and we’re back to square one. The Boys will seemingly never drop this corruption narrative, and just when we’ve let our guards down, Stormfront’s Nazi uprising now defeated, Neuman, the show’s AOC, has been outed as another corrupt player. I understand what about this arc would entice storytellers, but The Boys has been so overtly cynical and rebellious, having one pure soul outside the leading collective sounded, well, refreshing. Now we look ahead to Season 3, knowing Neuman is leading an “Office of Supe Affairs,” and she’ll be funneling funds to Mallory so she can head a secret assembly of superhero watchdogs. Presumably Butcher’s allies, but who knows. In a finale that brought momentary relief, we’re right back to the starting position. The answers we seek only bring more questions of righteousness, heroism, and who’s left to rely on in these uncertain times of political need.