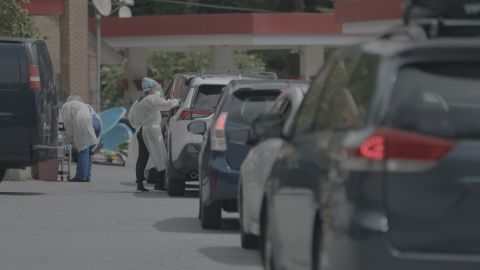 Alex Gibney's incendiary documentary falls short in depicting the full scale of its subject because the story of COVID-19 is not yet finished.

If you’ve been stressed or anxious about the government’s treatment of the Coronavirus since it first appeared on American shores in January 2020, Totally Under Control probably won’t alleviate those feelings. Shot entirely during the quarantine, Alex Gibney’s documentary catalogues the Trump administration’s many failures, as well as those of organizations meant to anticipate and address national healthcare issues, that created a catastrophic shutdown of the country and caused more than 200,000 lives lost.

To some extent, if you’ve paid attention to new headlines over the past nine months, much of this information will not be new to you. But Gibney’s probing interviews with a wide variety of institutional experts both in the US and around the world offer a powerful snapshot of a pandemic whose effects could have been more successfully mitigated under the guidance of healthcare rather than political leaders.

Starting with insights from Rick Bright, former chief of the Biomedical Advanced Research and Development Authority, Gibney (Enron: The Smartest Guys in the Room) traces a path from the first known COVID case arriving in Seattle, Washington, to the pandemic that has paralyzed the economy and inexplicably divided the U.S. people even further along partisan lines. The U.S., of course, was not the only, and certainly was not the first government to try to combat COVID; by comparison, the filmmaker charts South Korea’s path, where politicians left the response in the hands of medical professionals, and not only was there no shutdown but fewer than 500 of its more than 50 million citizens died. But what quickly emerges is a classic snapshot of Trump administration policymaking, a combination of traditional (and traditionally unsuccessful) GOP tactics and the President’s self-aggrandizing, detail-deflecting bluster.

As the virus spread, individuals installed at top positions at the Department of Health and Human Services and the CDC such as Alex Azar and Robert Redfield minimized concerns out of loyalty to the president, initiatives that prioritized free-market solutions, and general inexperience dealing with a threat of COVID’s magnitude. Despite the Obama administration not only creating a literal playbook for pandemic response in 2016, but staging a “Crinsom Contagion” simulation interconnected between state and national organizations in 2019 that anticipated the spread of the virus with unexpected accuracy, the Trump administration did nothing to meet its deadly needs head on, instead falsely blaming its predecessors and continuing to ignore the transmission risks.

More than 80 minutes of the film’s running time chronicles the days leading up to the March 16 shutdown, a staggering amount that reinforces just how much information was available to experts to deal with the virus before the government enlisted public support to try and get its spread under control. During that time, the CDC was responsible for a massive failure in testing - both creating and administering them - and the FDA was complicit in that failure with insufficient communication and a bureaucratic logjam that held up implementation. But in light of the development of not one but two Coronavirus task forces, one headed by Vice President Mike Pence and a second by Trump’s son in law Jared Kushner, what quickly becomes evident was - and is - necessary is whistleblowers, or perhaps simply government agency leaders willing to speak truth to power in an era of unconscionable corruption, to ensure that the American people are properly briefed about the risks they are encountering.

These individuals include the CDC National Center for Immunization and Respiratory Disease director Nancy Messonier, whose unvarnished truth about the imminent pandemic sent financial markets spiraling and led to her marginalization by a President whose re-election success hinged on his economic record. Bright, who features heavily in the film, was ousted from his role at BARDA after filing a complaint opposing the implementation of hydroxychloroquine, which was designated by the Trump administration as a cure for COVID despite no clinical evidence that it saved lives.

Meanwhile, 20-year-old interns were hired to work in Kushner’s task force to procure personal protective equipment, called PPE, without the training to do so, the contacts to find reliable suppliers, and the oversight or protocols to maintain adequate confidentiality - that is, until they were instructed to sign a nondisclosure agreement, in one interviewee’s opinion, to prevent them from talking about how badly they bungled the process. Gibney exposes the irresponsible, and inexplicable - or maybe just craven - decisions of the government to shift blame for CIVID explosions to states, while simultaneously denying them life-saving PPE, and then driving up costs as states were forced to bid against one another for the supplies. Meanwhile, supplier Mike Bowen predicted the need for n95 masks and other equipment to no avail, and encouraged government officials to no avail to begin the process of stockpiling equipment for first responders and essential workers.

Gibney’s kicker says as much or more than the rest of the film - the day after completion, Trump announced his Coronavirus diagnosis - but before he gets there, the filmmaker tries to step back and look at COVID as the latest tread in what will be an increasing existential series of threats to our health and well-being, brought on by climate change and other man-made processes. One supposes it’s valuable to look to the future and imagine, even briefly, what might be on the horizon, and contemplate how this nightmarish scenario will prove informative in combating those later. But like many of-the-moment documentaries about an ongoing crisis, and even in the capable and introspective hands of a filmmaker like Gibney, without a clear solution, or resolution, on the horizon, the remaining questions to be answered is what’s next to do, and how will all of this end? We know that the government has failed medically and ideologically to alleviate this punishing crisis. Totally Under Control has a firm grasp of its subject matter to the absolute last and latest minute, but there’s only so much perspective to bring until we’re looking back at all of this instead of going through it as we’re watching.

Totally Under Control will be available on VOD October 13th 2020.