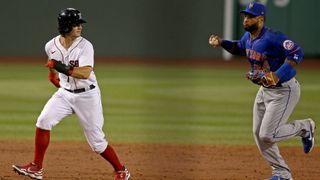 Baseball rivalries between cities don’t get any bigger than Boston and New York, but this game is 100% Yankee free. Interleague play is all over the schedule in 2020, and this will be game three of a four game series between the Fenway faithful and the kids from Queens. You can see if Boston can avoid the sweep as you watch the Boston Red Sox play the New York Mets on ESPN+.

When is Red Sox vs. Mets?

The Boston Red Sox will play the New York Mets on Wednesday, July 29 at 7:10 p.m. The game will be played at Citi Field in Queens, New York. While the game will be on two regional sports networks in that area, Red Sox vs. Mets will be broadcast nationally on ESPN+.

Nathan Eovaldi will get the start at pitcher for the Red Sox, and he will be facing Jacob deGrom, who is starting for the Mets.

The Boston Red Sox (1-4) have gotten off to a rough start to the 2020 MLB 60 game season but it is still early. The 2019 Red Sox (84-78) has an above average year, although they finished outside of the playoffs. It’s not a surprise that the team could fall off heading into 2020, as over the offseason they traded away two top players, including MVP right fielder Mookie Betts.

One of the players the Red Sox got in return from the Los Angeles Dodgers, Alex Verdugo, is starting in right field now, and he’s gotten off to a good start at the plate. Still the team sorely misses Betts power, as they’ve hit only a combined 5 home runs and no triples so far this season.

The New York Mets (3-2) are in second place in their division just a game behind the now suspended Miami Marlins. The 2019 Mets (86-76) finished a few games above .500, but they were a distant third place with 11 games separating them from the division winning Atlanta Braves.

The story on the field has been the fast starts by Amed Rosario and Michael Conforto at the plate, but more coverage in the New York back-pages has been off the field. The Mets may soon be sold, and former player Alex Rodriguez and Hollywood power player Jennifer Lopez are one of many groups bidding on the team.

How to watch Red Sox vs. Mets on ESPN+

ESPN+ is one of the best places you can watch a ton of MLB, including big games like this one. ESPN+ includes an MLB game almost every day of the season. ESPN+ also has special event sports, like UFC and Top Rank boxing, and pro team leagues, like NHL and FC Cup.

When they are in action, major college sports are also featured on ESPN+, including basketball, baseball, football and more. ESPN+ also has the full 30 for 30 documentary series back catalog, along with classic sports and news features.

How much will it cost to watch Red Sox vs. Mets on ESPN+?

Red Sox vs. Mets on Wednesday, July 29, is included with ESPN+, which costs $5 a month or $50 for a one year subscription. You are able to cancel at any time. ESPN+ used to offer a free trial , but they no longer do. The service gives users access to plenty of sports including tons of UFC fight cards. Plus, if you are looking for more you can upgrade from ESPN+ to the Disney bundle to get Disney+, Hulu and ESPN+ together for $13.

Sign up for ESPN+ today, and you can see Red Sox vs. Mets this Wednesday.