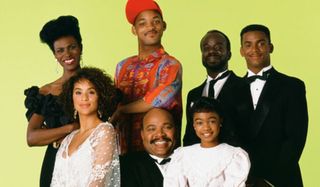 The Fresh Prince of Bel-Air turns 30 on September 10 - two thirds of a lifetime for yours truly, but a blink of an eye for the series, which streaming service Peacock announced yesterday is rebooting in a gritty new iteration with Will Smith and most of the original creators involved in producer or executive producer roles. Certainly audiences and storytellers have entered an era where a single run-in with neighborhood toughs, much less police, carries a different and perhaps more urgent weight than it did when Will got in the “one little fight” that set off the character’s migration to the privileged enclave of Bel Air, California. But looking back on Smith’s mainstream breakthrough as an actor, it’s remarkable just how vividly (and hilariously) his fictionalized adventures leapt off of the screen, while skillfully circumnavigating (and forging new paths with) many of the culture-shock tropes of that era’s sitcoms.

Of course, by 1990, Will Smith was both poised to inherit a well-defined entertainment legacy and blazing significant trails of his own, commercially and creatively. His third album with partner Jeff Townes as DJ Jazzy Jeff and the Fresh Prince, He’s the DJ, I’m the Rapper, not only went triple platinum but won the first-ever Grammy for Best Rap Performance, overdue but important recognition of the genre’s legitimacy. Meanwhile, sitcoms from Diff’rent Strokes to A Different World had already attempted to capture the integration and complexity of communities frequently defined, and more often separated, by color and class. A star vehicle for the seasoned entertainer but neophyte actor didn’t need transform the landscape of television comedy, but the details should at least distinguish it from what else was on TV at the time, and perhaps more importantly, aiming for the same viewership.

The Cosby Show, the series’ biggest commercial predecessor, managed to celebrate African-American life (and Black culture) in a way that was both groundbreaking and non-threatening, focusing on a middle-class black family, featuring notable black musicians and artists, and yet exploring topics that were considered “universal” (and certainly familiar sitcom tropes). The Fresh Prince was by design more youthful, but it could afford - or maybe was just eager - to be a bit edgier. The fictional Will Smith was a street kid relocating to the home and lifestyle of his rich relatives, allowing for plenty of fish-out-of-water scenarios while engaging in a conversation about privilege, authenticity, and cultural awareness that it feels like other series stayed away from, or at least didn’t target with the same kind of frequency and specificity.

From the pilot, “The Fresh Prince Project,” the show defined this dynamic in bold and unambiguous terms. Will’s irreverence and unpredictability offered a brilliant catalyst for comedy, whether he was living up to the Banks’ family’s expectations or subverting them; moreover, it gave dimensionality to the character’s growth throughout the series, where in the terms of 1990s episodic TV he seemed to learn and adapt to new situations. Smith’s role wasn’t singularly defined as “mischief-maker,” but a celebration of his true self, filtered through educational, personal and social opportunities he would not have experienced if his mom hadn’t shipped him to California.

The generational, geographic and economic issues addressed were largely unprecedented for a show that was not specifically aimed for Black audiences - and you have to imagine what an opportunity the showrunners saw they had as soon as its popularity took off. The Fresh Prince was effectively an answer, explanation and rebuke to every youth - and color-discriminatory statement imaginable - fears about Black teenagers and youth culture in general being scary, impenetrable and foreign, and in some cases finding common ground, and others, acknowledging a divide unbroachable by adulthood, much less white America.

Simultaneously, the show cleverly observed white America’s fixation on Black culture, its fetishization of Blackness and the perception of a coolness that it would never possess. From Carlton’s white classmates idolizing Will to the coterie of family neighbors and business associates endlessly intrigued by his unvarnished honesty, the show spotlighted how stars like the real-life Smith are celebrated and put on a pedestal often as much because of their otherness as the immediate and irresistible allure of their talents.

On the other hand, placing the fictional Will with a Black family elevated the racial dimensionality of the show, and offered and opportunity to present these questions of ethnic authenticity and identity to audiences who had never encountered them before. In clumsier hands, Will’s righteous (and sometimes self-righteous) youthfulness positions might simply be presented as the “right” point of view, or emblematic of a future they’re left out of or behind from by dint of their age and privilege. But a palpable love and respect for all of the characters, even the ones made fun of the most often, helps provide an opportunity for a different kind of learning than could happen earlier.

It’s in the first six episodes that Will and Carlton (Alfonso Ribiero) are detained by police when Carlton agrees to drive a car owned by his father’s white colleague to Palm Springs (“Mistaken Identity”). The execution is mostly comedic, but there’s a risk-taking to exploring this topic on an all-ages sitcom; Will is unsurprised to be stopped by police, but Carlton, who’s never run afoul of the law, suggests that the whole thing is a misunderstanding. Meanwhile, Uncle Phil (James Avery) brings down the righteous fury of his law degree on the cops who detain them - an act of swift justice that is as satisfying as it feels unlikely - but that single episode both reinforces, rejoins and earnestly questions a situation that has always been all too frequent, from a perspective that rarely existed before then.

In “The Ethnic Tip,” Will and Carlton (Alfonso Ribiero) get a lesson in Black history from Aunt Viv (played by the authoritative force of nature Janet Hubert-Whitten until the end of Season 3) that actually teaches Black history for several minutes on a prime time sitcom, and quickly learn that their own biological relationship to the material doesn’t mean they already know everything they need to about it. (Moreover, the white kids in their class end up embracing the  curriculum more aggressively than Will, who advocated for the class in the first place.) If The Cosby Show took a more civil, Martin Luther King approach to Black history, The Fresh Prince was, well, not quite Malcolm X, but it was unafraid to venture further into deeper questions of blackness (and did actually end “The Ethnic Tip” with a Malcolm X quote to boot).

The juxtapositions between Will’s scrappy upbringing and the Banks’ success becomes a frequent source for humor, but when it becomes meaningful in the show is when the characters become agents in examining their own Blackness. Philip and Aunt Viv (Janet Hubert-Whitten, and after Season 3, Daphne Maxwell Reid) are open-minded (if sometimes reluctantly so) but, again, insulated by their wealth from the street-level experiences that Will experienced in Philadelphia, and his presence in their lives reminds them as much where they came from as they give him an opportunity to see a broader, more optimistic future. When Uncle Phil suggests he’s been a lifelong fan of classical music, Viv retorts, “Phillip, when I met you, you were listening to James Brown.” And after Will feeds more colorful stories about his uncle to a reporter doing a story on his impressive professional accomplishments (“Not with My Pig, You Don’t”), the incident forces Phil to reckon with the rural, poverty-stricken upbringing that he was both proud to escape and also that made him how he became.

Consequently, the show did prove to be revolutionary, at least for suburban white kids who weren’t old enough for the college-focused hijinks of A Different World, much less sophisticated enough for the intra-racial commentaries of films like Spike Lee’s School Daze. For a person whose discovery of rap music was catalyzed by He’s the DJ, I’m the Rapper and the seeming hundreds of times that MTV played the video for “Parents Just Don’t Understand” (which presaged the style used for the show’s graffiti-covered, sped up opening credits), this show changed an understanding of hip-hop culture, of Black people, and the sociocultural relationship with black people.

Absurd as it sounds, I was one (of many, I imagine) who wanted to be Kellogg “Cornflake” Lieberbaum (Michael Weiner), the awkward white kid whose awkwardness shepherded him into Will’s good social graces. And when these characters questioned what opportunities (or limitations) led them to their present circumstances, and the art and culture they experienced made them dance or dress or think in certain ways, it did all of those things for me as well (and I have the pair of Jordan Retro V “Bel Airs” to prove it).

The rest, of course, is history with Smith; his film career took off just a few years later and became one of the biggest stars in the world, showcasing both the background from which he came, and the possibility to be much more - truly anything that he believed or could envision. But The Fresh Prince of Bel-Air remains a watershed moment in sitcom history when a show aimed at the mainstream could take risks, and somehow do it without feeling intimidating, foreign, or dangerous: It was the rare sitcom that shined a light on a lot of important topics and yet still remains timelessly funny and relevant, even as it anointed Will Smith’s place - deservedly, and possibly inevitably - in the cultural firmament.