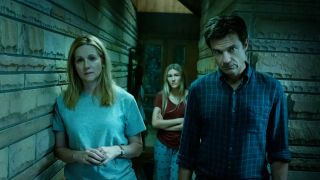 If you love films and spend way too much time thinking about awards shows like the Emmys or the Oscars, then the chances are that you are familiar with the concept of awards bait. Every year, as the movie world gears up for the exhausting delight that is awards season, a slew of titles enters the fray that, for better or worse, are deemed to be the kind of stories that are just desperate to receive golden statues and standing ovations. You know the films I’m talking about: The well-manicured historical dramas full of lavish costuming and many a stiff upper-lip; the inspiring biopics about tortured geniuses and their supportive wives; acting tour de forces where a performer spent months in character and even longer bragging about it to the press. Is there a movie dropping this year featuring a beloved actor playing a familiar face, complete with prosthetics and noticeable weight gain/loss, preferably one that tells a story close to Hollywood or one full of things being smashed? If so, then you can bet that it’s being called the awards bait of the season.

This concept is mostly discussed in terms of films because of the specific nature of marketing and publicity that goes into the annual awards race leading up to the Oscars. It’s a process that requires a cycle of tried-and-tested tools, from schmoozing at the right parties to glossy magazine interviews wherein the director wears a fancy scarf and discusses their inspirations. With every year, there’s a new set of movies to consider. Compare this to the landscape of television, where shows can run for many seasons and re-enter the awards conversations with regularity. This makes the idea of awards bait for TV much trickier to pin down. Yet, every now and then, there’s a TV series that doesn’t go away, one that appears on Emmy ballots with such inevitability, even if critics don’t entirely agree with its placement. Consider how Frasier was the Television Academy’s most beloved comedy in the ‘90s, long after it passed its prime, or the domination of Veep and Game of Thrones in the 2010s, even as the latter became a contentious topic.

And then there is Ozark.

The series stars Jason Bateman as a former financial advisor who sets up a drug smuggling and money laundering scheme in the Ozarks region of Missouri as amends for a high-price deal gone wrong. Netflix's crime thriller premiere in 2017 and was warmly received by critics. According to Nielsen, the third season of the show garnered an average minute audience rating of 8.7 million viewers in its first ten days of availability, making it one of the most-watched shows on the streaming service (as always, it is tough to fully gauge the success of Netflix's shows since they don't release verifiable data on their numbers so take all of this with a pinch of salt.)

It's not that Ozark is a bad show or is undeserving of critical acclaim, yet its continued presence at the Emmys, often over shows that many critics and awards experts predicted would receive the spotlight, has garnered it the label of awards bait in a manner that is rare for modern TV. At last year's Emmys, for example, Julia Garner won Best Supporting Actress in a Drama series over four separate actresses from Game of Thrones in that show's much-hyped final season. Jason Bateman also won a directing award over the likes of Succession, Game of Thrones, and The Handmaid's Tale, all of which were more lavishly praised for their direction.

Netflix has only been making original programming for seven or so years. In the context of American TV, they are still one of the youngest kids at the table. What they do possess, however, is immense financial clout. Netflix was willing to throw everything at the wall to see what stuck in an attempt to get the legitimacy and attention of the industry that seemed so hesitant to welcome them in. Their awards campaigns for the Emmys (and, later, the Oscars) were notoriously flush with cash. Variety reported that Netflix was spending tens of millions of dollars on its Emmy campaigning. This was seen as a worthwhile strategy as awards attention could lead to more paying subscribers. It also put them head and shoulders above the competition because the traditional networks simply could not keep up with their checkbooks.

It didn't hurt that shows like Ozark are already primed for awards attention. It's really the perfect storm of Emmys attention: Pre-established stars like Jason Bateman and Laura Linney in the lead roles; a dark, socially relevant story with a dark tone and occasional tear-jerking moments; a murderer’s row of character actors in the supporting roles; an ensemble of morally grey characters; and an overwhelming bleakness. Even the ways the show is mocked are considered awards-friendly, such as its almost impenetrably dark cinematography that has still received multiple Emmy nominations. If a show looks prestigious by the standard definition of the term (glossy, muted color palate) then the job’s half-done.

With concepts of awards bait, it’s important to understand the voter base itself. Emmy voters are majority white, tend to skew older, and feature a lot of industry figures who work in publicity and with agencies. That agents and publicists can vote has been considered somewhat controversial, with opponents claiming that it only encourages block voting for said agencies' clients. that may be true, but it also overlooks how the average voter also tends to work that way. They don't want every eligible show (how could they when there are so many?) and they still have major blind spots in terms of race. In the Best Actor in a Drama Series category, for example, out of 67 nominations over the past ten years, only six of them were for men of color. Even with the progress pop culture has made over the past few years, whiteness is still the default mode for critical prestige.

Ozark will wrap up after its fourth season, thus bringing an end to a curious era of Netflix’s domination of original television programming in the 2010s. The company seems destined to continue this level of gargantuan success in the coming years, even as the streaming market becomes ever busier. Five of this year's eight nominees for Best Drama are from streaming services, with most of them coming courtesy of Netflix. This is the future of television, and Ozark is but one example of the medium's new status quo.