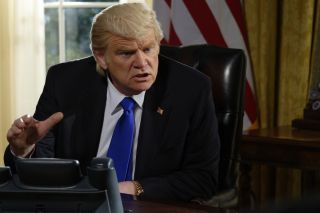 Brendan Gleeson is one of those actors who makes you say "That guy!" in just about everything he's been in. And dude has quite the resume dating back 30 years now. From Braveheart to 28 Days Later, Harry Potter's Mad-Eye Moody and Stephen King's Mr. Mercedes, the Irishman melt's into his characters just as easily as he is recognizable.

His take on Donald Trump, however, may well be one for all time.

In fact, if the 135 seconds of trailer for The Comey Rule on Showtime are any indication, Gleeson might be too good a Trump. Forget Sarah Cooper. Forget Alec Baldwin. This Trump actually seems sinister — not just acting like it.

And that's absolutely giving short shrift (just as the Donald himself would want, right?) to the other names on the bill. Jeff Daniels as Comey. Holly Hunter as Sally Yates. Michael Kelly (himself no stranger to the political thriller) as Andrew McCabe.) Jennifer Ehle as Comey's wife, Patrice. Scoot McNairy as Rod Rosenstein. Jonathan Banks as James Clapper. Steve Zissis (yes, really) as. Jim Baker. Joe Lo Truglio (yes, really) as Jeff Sessions. Peter Coyote as Robert Mueller. Shawn Doyle as Bill Priestap. Never mind that Doyle looks way more like James Comey than Jeff Daniels, but here we are.

It's a ridiculously good cast for an incredible story that we still don't have all the answers to — and likely never will. If you've at all been paying attention for the past four years you know how this all goes. And if you've really been paying attention you've no doubt heard the likes of Clapper, Rosenstein, Baker, Priestap and Rosenberg (who has an excellent speech that I still listen to at least once a year) on any number of podcasts.

And on Sept. 27, Showtime will tell its version of events.