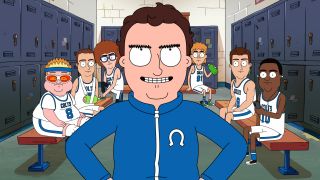 Forget, just for a moment, that the main art for Hoops on Netflix has a high school boys basketball coach naked on a desk, strategically covered by an orange orb. "It's ball or nothing," reads the caption beneath him. Wildly inappropriate can still be funny, even in an era in which athletics are under increased scrutiny — and for very good reason.

But we've heard that story before, any number of times. Hoosiers did the serious side. Teen Wolf learned some lessons. Varsity Blues managed to hit both at once while still being a cookie-cutter movie.

And now we have Hoops. The question is how much more it's going to have beyond what we see in the trailer. Ben Hopkins (voiced by Jake Johnson of New Girl) is a loser coach just trying to stay within reach of his father's coattails, His team isn't exactly any better off. He's just hoping his wife doesn't actually leave him for her boyfriend, who also happens to be Ben's best friend.

There's going to be a whole lot of wrong in this series, which premieres Aug. 21.

Will it have anything else of value? We'll just have to see.