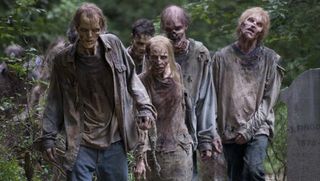 Walkers in 'The Walking Dead' act as a pretty solid metaphor for the unkillable series. (Image credit: AMC)

Today via press release, The Walking Dead creator Scott M. Gimple announced that the long-running zombie series would be coming to an end. There are two main caveats to that, with the first being that Gimple is only talking about The Walking Dead proper. The second is that there's still the Season 10 finale and a 24-episode Season 11 to the series before it will be coming to its close.

Gimple's statement:
It’s been ten years ‘gone bye;’ what lies ahead are two more to come and stories and stories to tell beyond that. What’s clear is that this show has been about the living, made by a passionate cast, team of writer/producers, producers, and crew, bringing to life the vision put forth by Robert Kirkman in his brilliant comic — and supported by the best fans in the world. We have a lot of thrilling story left to tell on TWD, and then, this end will be a beginning of more Walking Dead — brand new stories and characters, familiar faces and places, new voices, and new mythologies. This will be a grand finale that will lead to new premieres. Evolution is upon us. The Walking Dead lives.

Season 10 of the smash hit zombie series was put on hold like the rest of the entertainment industry, and will finally be airing on October 4th. Meanwhile, Fear The Walking Dead, the series' popular spinoff, will shift its season six premiere to October 11th. As of right now, there's no planned end for Fear.

The franchise also has a third spinoff in the works. There are two seasons planned for World Beyond, with the series focusing on a group of teenagers who found themselves trapped in the zombie apocalypse. Check out the trailer.

Still not enough walkers for you? Don't fret! We haven't heard that the planned Rick Grimes (Andrew Lincoln) film isn't happening yet, so you've still got that to look forward to. Plus, there's word that a Daryl (Norman Reedus) and Carol (Melissa McBride) spinoff could be in the works, too.