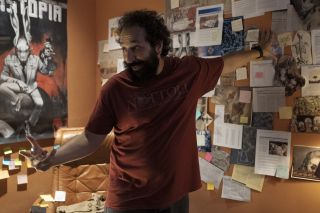 Premiering September 25, Amazon Prime’s Utopia envisions a world that just a few short months ago might have seemed like pure science fiction, but now skews uncomfortably close to reality: a group of comic book fans become convinced that their favorite graphic novel unlocks secrets to present and future world events - including a global pandemic - as a shadow organization attempts to silence them from exposing the truth. Inspired by the 2013 BBC series of the same name, the show intended to update, and explore, many of the same real-world ideas as its predecessor. But in an era in which conspiracy theories proliferate online, causing damage and disrupting political, social and economic systems, the risk of misrepresenting, or validating, conspiracies and the people who believe them is more real than ever.

Rainn Wilson, who plays Michael Stearns, a scientist at a community college whose virus unexpectedly escapes a laboratory and spreads across the globe, reflected on the challenge of portraying conspiracy theorists in a story like Utopia where their idiosyncratic beliefs, and paranoia, turn out to be right. “I agree with you it's a little bit dangerous to be portraying conspiracy theories with such kind of frivolity, although there are definitely lives are lost and torture is committed along the way,” Wilson tells What To Watch. “In a time when conspiracy theories are really messed up and potentially really dangerous, the deeper you dive into some of this stuff, it gets really scary, really fast.”

Wilson, who played the ambitious, often abrasive Dwight Schrute on The Office, says he observed reporting about a conspiracy theory on the same day as his interviews for Utopia. “Just in Vice this morning, it was reported that one quarter of young people in America think that either the Holocaust was a hoax or that it was completely over-exaggerated. And that's a kind of conspiracy theory - that there has been some conspiracy by what, I don't know, the Jews? - to kind of over-hype the Holocaust or something like that when there's documentation of millions killed. So the stakes are pretty high. And if we were to do a second season, I think it would be really important to deal a little more realistically with the world of a conspiracy theorists.”

Conspiracy theorists have long been a staple for storytellers, frequently depicted as lonely, socially-awkward individuals who happen upon or perhaps search out a truth that the rest of their community, or indeed the world, has denied or ignored. Notwithstanding the question of whether being proven right changes their perspective in the story, much less the audience’s relationship to those individuals, online communities have proliferated in the last several years advancing dangerous theories that exposed real-life individuals to abusive behavior or physical or financial harm. Qanon, for example, has become a repository for such theories that have bled over into real life, particularly after President Donald Trump refused to denounce them and their proponents.

Meanwhile, Dan Byrd plays Ian, a skeptic among the conspiracy theorists whose obsession with the Utopia comic drives the series. Looking at the way that conspiracy theories have infiltrated the mainstream, Byrd says he isn’t worried that audiences will confuse the show’s portrayal of its characters as a validation of real-life theorists - or their theories. “Even though I know it's in the news more because it's being sort of validated by [Trump], I still see people who subscribe to those beliefs and those organizations in particular that you named as pretty fringe and pretty extremist,” he says. “I don't feel like it's really entering the mainstream. I feel like it's being talked about a little more, but I don't think there's more people necessarily subscribing to those ideas in like a sincere way. That's just my interpretation, but maybe I'm wrong about that.”

Offering his take on Utopia, he says, “I think this show is escapism, entertainment. It's supposed to be entertaining above all else. And conspiracy theories by their very nature are entertainment. They're just entertaining to listen to, even if you don't think it holds any weight in reality,” he suggests. “It's kind of like a little vacation for your brain to just consider something else. So I think that's kind of why we're sort of emboldening that narrative in this show, for entertainment reasons more than anything else.”

“I don't think Gillian's trying to broadcast that there's validity in these sort of fringe ideals that you hear about on Twitter and stuff,” he says. “And I do think it is genuinely entertaining. So in this format, I think it works well. In real life, there's obviously more to it. But I don't look at this show as something that's emboldening those perspectives or offering any validity to them because of the context of the show.”