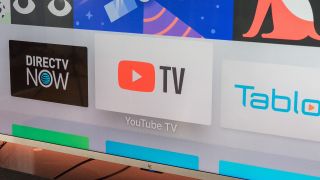 YouTube TV increased its price this summer by 30 percent, but it also added a number of channels. (Image credit: WhatToWatch.com)

YouTube TV has had a turbulent couple of months. That's mostly come from the blowback that inevitability happens anytime there's a price increase — and we won't know whether the 30 percent hike to $65 had any effect on the subscriber base until Google gives us new numbers on its live TV streaming service, which isn't something it does very often. (Edit: And, yeah, let's not forget that YouTube lost access to Fox's Regional Sports Networks — another thorn in the side of a lot of folks. Thanks, Nancy, for the reminder.)

The last time Google gave us a peek inside was in February 2020 for its Q4 2019 earnings call, when it announced that YouTube TV had more than 2 million paying subscribers. That easily put it in no worse than third place in  the list of the largest MVPDs in the United States — and it might well be as high as No. 2. But without actual numbers, there's no way for us to tell. (Hulu with Live TV is No. 1 at 3.3 million subscribers, and Sling TV is either second or third with 2.3 million.)

And so we listen to Alphabet (that's the umbrella corporation over Google and YouTube and the like) earnings calls with a glimmer of hope that we might get some sort of update as to the numbers. That didn't happen this week, but Alphabet CEO Sundar Pachai did give a sliver of substance during the Q&A session.

Justin Post from Bank of America Merrill Lynch asked the following: "We saw the YouTube TV price increase. Pretty interesting business model. But, longer term, do you see that as really strategically important for the YouTube Brand, or do you think you can have a really profitable business on that?"

The business model really isn't that interesting — It's straightforward and pretty much like every other MVPD business model. But in the larger scheme of things for Google, it's still a good question.

"It's a good question," Pichai said. I spoke earlier about even from a brand and how people think about it, they are interested in streaming. So as YouTube TV gets more scale, I think we will see more opportunities there."

Not a lot of meat there. Yes, people are interested in streaming. And, yes, as more people use your product, the product gains more opportunity. And we've seen that, as the price increase came along with the addition of a number of ViacomCBS channels, and HBO and HBO Max are now available for subscription from within YouTube TV.

The more interesting part of Pichai's answer address a real concern for any Google product — longevity. Google is famous for ruthlessly killing off products that don't make money. But Pichai very much sounded like YouTube TV is in it for the long haul.

"We are obviously still in the early stages of building out the product," he continued. "And just recently, we've added a bunch of new channels and making sure it's working well. In the U.S., the TV market is a big part of the advertising market too. So overall, if we can invest here and scale up, I think the synergies with YouTube will become more meaningful over time."

In other words, as YouTube TV has more eyeballs in front of it, more advertising will reach those eyeballs. And that's what Google is all about.