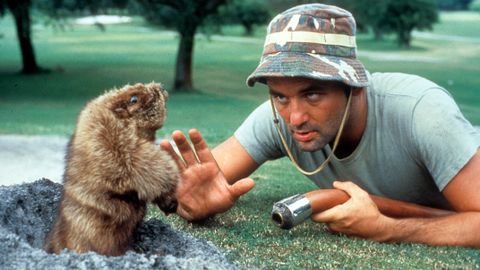 The film is as disjointed as you'd expect given everyone involved — and that's exactly what makes it great.

Same goes for those of us who, ourselves, have recently reached the halfway mark.

But there's no doubt about it, Caddyshack is one of those movies that's stood the test of time. There's a good chance you've never actually seen it in its entirety, uncut and uncensored. But it's been a cable TV staple, and for good reason. The linear stories almost don't matter, until they all converge at the end.

The awful people of Caddyshack

Deadbeat caddy Danny Noonan (Michael O'Keefe) wants to go to law school, but he can't afford it. The affluent Judge Elihu Smalls (Ted Knight) who plays at Danny's club just blows him off. Rodney Dangerfield blows in as Al Czervik (though to this day if you asked me the character name I'd have needed to look it up, which I just did), another rich guy with all kinds of toys that enable him to actually make golf fun. He's there to have a good time, full stop. There's Ty Webb (Chevy Chase), who's uber-rich but ultra-cool in a very zen way that lets him float above everything.

And then there's Bill Murray as assistant groundskeeper Karl Spackler. (It's easy to remember that he wasn't actually the one in charge, but then again it's also easy to figure out why he's not.)

And, finally, the gopher. You can't see a gopher without thinking about Caddyshack. (Why you'd think of a gopher in any other context is beyond me.) Any non-serious person who plays golf (as opposed to an actual golfer) likely had a gopher atop their driver at one point. Yes, that includes me.

There's so much wrong with this movie while simultaneously capturing what's great about golf. It's entirely possible to never actually play with a caddy — that'll vary depending on your income level, and nobody ever carried my clubs except for me. And I've so I've also never seen a gang of caddies dressed in street clothes hamming it up during a round.

The entire character of Lacey Underall is just wrong, even though Cindy Morgan plays it perfectly. She's not the country club type — brash, and unapologetic, but also very braless, which is not a thing that would be allowed at anything other than a public track. (It had more to do with the post-women's lib movement, she's said.) But it's also impossible to overlook the stories of how she was bullied by a producer into her topless scenes, which is a little hard to square with late director Harold Ramis' beloved status in the Hollywood pantheon.

But she was able to fire right back at Chevy Chase and Ty Webb (where does one begin and the other end?) without missing a beat. "I enjoy skinny skiing, going to bullfights on acid. ... I bet you got a lot of nice ties. You wanna tie me up with some of your ties, Ty?" Ty knows what he's up against, that she sees through his bullshit. So much that there's only one reply that will do. "Let's pretend we're real human beings."

And then Spackler nearly shoots them, aiming for the gopher.

The awful trailer of Caddyshack

Seriously. Caddyshack is a hilarious movie. But how bad is the original trailer?

The awful legacy of Caddyshack

So many great lines from Caddyshack that have survived the years.

"Don't sell yourself short, Judge. You're a tremendous slouch."

"Somebody step on a duck?"

You can't be in a room full of people watching football (back when we were able to do so, anyway) and have a kicker line up without someone yelling "Noonan! Noonan!!!" That, of course, is a reference to the jerk-offs trying to will young Danny to miss his putt at the end of the film. Mixing sports metaphors? Sure. But that's also one of the most quintessential things about sports, and it's evident throughout golf.

And, of course, there's the infamous Baby Ruth in the pool scene — singularly the best worst product placement in this history of film. So much so that I'm surprised it's not a prank we see pulled more often here in Florida.

On the other hand, it's probably for the better since the reverse is even more frightening. Fortunately that only happens once a season of swimming lessons or so.

So I got that going for me, which is nice.

By the way: If you love Caddyshack, you absolutely must read Rick Reilly's Who's Your Caddy.