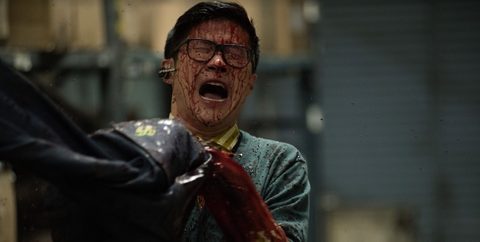 'Slaxx' leans into its goofs, punches up its killer-cotton gags, and still finds its vicious streak amidst corporate satires that are stained bloody red.

Elza Kephart’s Slaxx is horror-comedy about capitalism and consumerism, as told through killer denim. If only to stress the importance of its themes when they matter most, Kephart and co-writer Patricia Gomez frontload their screenplay with gore and mall-rat humor. It's got the looks that kill, and they kill brutally, that's for sure. There are some structural issues presented when a jazzier, bloodier first two acts give way to a dourer, at-odds-with-itself third. However, Kephart still sustains the ridiculous mania of murderous trousers to an approvable degree.

Libby McClean (Romane Denis) is the bright-eyed, obsessive newbie hired by apparel company Canadian Cotton Clothiers to help stock for their upcoming Monday Madness super sale. She’s greeted by store manager Craig (Brett Donahue), is wooed by his corporate charms, and it’s straight to work for the release of CCC’s newest product: Super Shapers. A pair of pants that accentuate the form-fitting curves of whoever wears them, sworn to be crafted using only the most humane and organic methods. The store enters into lockdown to get the floor in order before dawn, but the unthinkable happens: a pair of Super Shapers starts killing employees, and there’s no escape.

There’s a reason for all the hip-hugging carnage, and it’s rather rudimentary. Slaxx nails the cultish appreciation of brands like American Apparel and Urban Outfitters, who can preach all these enticing moral values, but who’d know otherwise? We live in a world where the dollar rules all, brands only care about their presentation in public, and overseas labor is exploited for abysmally low costs. We’re shown all of that commentary, from Craig’s ruthless preaching of company policy (even while corpses mount) to the backroom secrets shoppers would rather ignore to continue their blissful consumption. It’s a simple message that I wish was developed a bit farther, or satirized with evenness between more energetic beginnings and somber ends, but speaks with meaning.

When Slaxx leans into its psycho-killer supernatural trousers as slasher villains, it’s at its best. Where In Fabric is a more artful take on deadly clothing about the seduction of a flowing gown with cruel intentions, Slaxx plays more like a creature feature. The titular "slacks" are actual clothing, worked by effects specialists wearing green suits (not visible in final visuals). It accents a wonderfully silly and practical feel that needn’t rely on CGI animation. Gore effects are super squishy and gross and dismember with glee, but the more significant accomplishment is never allowing the moving, puppeteered pants to feel like a one-time gimmick. The more they slurp blood puddles, the more they dance to Bollywood music, the more they assemble human figures using mannequins, the more audiences will remain impressed.

It’s a movie about malevolent dungarees. Realism is already out the window. A worse effort would have cheaply thrown some pixelated garments on screen. Kephart’s film instead makes you believe, in this universe, that pants can achieve mobility and personality. It’s the little touches.

There are times when Slaxx faces lulls, and the proverbial party stops hopping. As the film comments on CCC’s outward appearance versus uglier authenticities, we’re treated to colleagues like Lord (Kenny Wong), Hunter (Jessica B. Hill), and Jemma (Hanneke Talbot) dishing sass while belittling Craig’s posh dictatorship. When fashionista vlogger Peyton Jules (Erica Anderson) crashes the overnight restock for an exclusive video with a pair of Super Shapers, that bitchy-shifty energy is still vivid. Then the bottoms start to slay.

We’re left with a lot of running time where the pants tell their story, share their motivations, and allow Libby her savior arc that instead proves the worthlessness of humanity in the face of injustice and wrongdoing. There’s a stark contrast between the gruesome peppiness of zipper “bites” or decapitations and the reflective reverence of Kephart’s third act. Some will be lost along the way, and that’s expected due to a jarring tonal shift.

Plus, there’s satire left unanswered. Like, is the “SS” emblem supposed to resemble that “SS” emblem? What does the red charge-bar indicate? How else could CCC’s in-store culture have been exploited past the obvious? Enough is achieved, but there’s a sense that more in-depth exploration of themes could have mined even deeper comedic depths.

In Slaxx, there are two films at war with one another. At the onset, a commercial critique of boutique glamor brands that we praise through monetary rewards that have perfect-looking models pushing more than products, but a faux sense of wellness and confidence. In the latter half, a grim-serious exposé on the shady practices said mega brands rely on to make millions upon billions for their boardroom executives. One wants to be the killer-chic nightmare that squeezes every outlet stereotype into a comedy-forward riot. The other takes stances, exposes child labor atrocities and evokes the darkness, and leans into less light-hearted midnighter vibes. I’m not sure both sides are seamlessly stitched together, but that doesn’t stop this delightfully dangerous wardrobe slasher from halving prices and torsos like death is going out of style.

Slaxx has been acquired by Shudder and will be available to stream on the platform sometime in 2021.