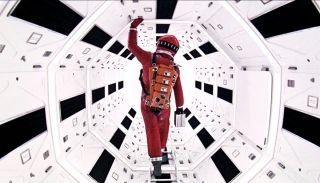 Aboard the space station of 2001: A Space Odyssey. (Image credit: Metro-Goldwyn-Mayer)

Science fiction is not about space, lasers, robots, or aliens. I mean, science fiction heavily features those things, but it isn’t really about any of those genre trappings. Science fiction as a genre is not so much about predicting our futures or presenting coherent models for alternate realities as it is about exploring our own reality through metaphor and allegory. Sure, the mode of speculative fiction uses futurism as a means to explore challenging concepts, but it’s those concepts that define science fiction, not the tropes that make the surface dressing of the genre. That’s why the best science fiction has more on its mind than the obvious. Here are some of the best sci-fi movies to get stuck in the wrinkles of your brain.

Stanley Kubrick’s collaboration with renowned sci-fi author Arthur C. Clarke is lauded as one cinema’s greatest achievements for good reason. 2001: A Space Odyssey is a surreal experience that was unlike anything that had preceded it, embracing a level of realism that science fiction films had thus far eschewed for pulpy adventure. But through the span of three acts examining humanity’s pre-history, its future, and its post-human evolution, the film raises a collage of questions about human existence. Are we gods unto ourselves with our ability to create computer intelligence? Are we primitives dabbling with forces beyond our comprehension in the vast reaches of space? These questions prove impossible to answer, only to be interpreted through an avant garde deconstruction.

Ridley Scott’s Alien is a bleak, nasty film about how capitalism places profit toward violent ends over the lives of individuals who enable that profit. Following a crew of working class shipping personnel contractually goaded into investigating a mysterious signal they have no stake in, Alien rather blatantly deconstructs the worker-employee relationship by subjecting the crew to violations of their bodily autonomy by a phallic creature that procreates through forcible impregnation and bloody destruction of its host. Sure, it’s a horror movie set in space, but the horror is grounded in a lot more than H.R. Giger’s brilliant monster design and Scott’s dark and grimy atmosphere. It doesn’t take much digging to see the philosophical perspective in his vicious little genre hybrid.

Yes, Ridley Scott does deserve two spots on this list, as Blade Runner – and more specifically, The Final Cut – is a masterpiece of exploring memetic identity and questioning what it means to be alive. In exploring the stratification of synthetic replicants as a slave class in contrast to the visually indistinguishable human race, this loose adaptation of Philip K. Dick’s Do Androids Dream of Electric Sheep? posits the question of how we engage with the personhood of humanity’s successor species, the artificial creations who live and breathe as we do. The obvious allegory is to how society treats racial and sexual others, which only becomes complicated by the realization that our main character might not even be human himself. But does that change his humanity, or does it expose the arbitrary restrictions we place by empathizing with only what we consider “human”?

Jurassic Park is a popular film that spawned a franchise because of our innate fascination with the literal monsters that preceded us on Earth, but it can be easy to forget that the core conceit of the film is a question of scientific ethics. As Dr. Ian Malcolm bluntly states, “Your scientists were so preoccupied with whether or not they could, they didn’t stop to think if they should.” Life is an inherently messy biological function, and the hubris that humanity believes it is divorced from nature enough to bend it entirely to our will, even so far as reversing an extinction event for theme park amusements, is the core of Jurassic Park’s ethos. Whether it’s the greed of a disgruntled employee or the careless use of frog DNA that undercuts efforts to stymie reproduction, there will always be factors that derail plans for human control of forces they cannot collectively master.

Similar to Blade Runner, the animated classic Ghost in the Shell is interested in questions of identity, but it explores them less societally and more introspectively. As a cyborg whose parts are interchangeable and whose brain is irrevocably intertwined with machine enhancement, Motoko Kusanagi has to come face to face with the possibility that she might not even be alive, that her existence as a person with thoughts and feelings might just be an illusion given continuity by ones and zeroes. The film asks what it even means to be alive, and whether the next step in human evolution is to embrace the mechanical and leave the individual self behind with our biology. It’s a story that results in Motoko’s discovery of a new sense of self, crossing the boundary into post-human thought.

The Wachowski Sisters created the ultimate Fight The System movie with The Matrix, so successful that it was widely embraced and radically oversimplified by a majority of its audience. It’s seemingly paranoid interpretation of the world as a place constantly out to keep the individual down for the sake of social control is in truth based on concerns over the erasure of minority identities in the face of white male homogeny. The more recent revelation that the Wachowskis are themselves transgender women only further cements this reading, so while the film was revolutionary in developing its special effects and visual style, it was also advocating a revolution of self-acceptance in the face of oppressive erasure. Somehow that feels more relevant now than it did even in 1999.

If there’s one thing that director Bong Joon-ho loves to deconstruct in his films, its class stratification. Snowpiercer is a blunt and brutal allegory for how the wealthy manipulate and develop systems with the explicit purpose of holding down the poor and powerless, despite those poor having superior numbers and implicit strength. Set in a train circumnavigating a post-apocalyptic world where the poor must literally eat the waste and scraps of the cars with the resources to make their own food, this film makes no bones about how social indoctrination and state-sanctioned violence are the mechanisms by which those at the head of the train hold on to their power, all as the engine of society chugs along in circles and our own personal hell freezes over.

Self-identity has been a common theme on this list, but Annihilation asks a more specific and perhaps more existentially horrifying question than the other entries. What if going through a personal change, a traumatic experience, no longer makes you you? This is literalized in the film by a localized “Shimmer” where animal and plant life is transformed by an unknown alien presence, but the theme the film explores through the losses and tragedies of the women who explore The Shimmer ultimately arrives at the revelation that our traumas are interconnected, that we leave imprints on one another to the point where who we used to be is annihilated in the face of what we must become. There is an interweaving of tragic beauty in this realization, that we all hurt, but we are not alone in hurting. We become someone new through our pain, and that is terrifying. But it’s also human.