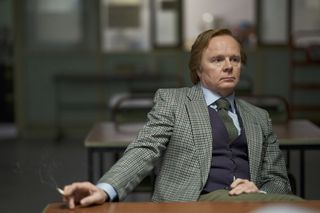 The Crown star Jason Watkins has taken on many challenging roles on television, and we’re about to see more of his brilliance in ITV drama Des. Much of what is known about the extraordinary Dennis Nilsen case in Britain is due to Brian Masters, who wrote Killing For Company, a detailed biography of the serial killer from interviews with Nilsen himself as the case was unfolding. Jason Watkins now plays the biographer in ITV’s three-part drama Des, with former Doctor Who star David Tennant giving a thoroughly chilling performance as Dennis Nilsen.

In 1983, Britain was shocked by the gruesome case of 37-year-old Dennis Nilsen, a seemingly mild-mannered Job Centre worker affectionately nicknamed "Des" by his co-workers. He was accused of killing a number of young men over five years. Police had been called to Nilsen’s home at 23 Cranley Gardens, north London, after human remains were found in a drain, but as they questioned Nilsen, they were left reeling when he confessed to murdering "15 or 16" people.

Here, Jason Watkins reveals the part his Des character Brian Masters had in bringing many aspects of the case to light, including the state of Dennis Nilsen’s evil mind.

“Brian Masters' book, 'Killing for Company,' is a seminal crime work," says Jason Watkins. “He was both fascinated and appalled by Nilsen and why he committed these awful crimes. So during the investigation he met up with Nilsen in jail, who told him his life story. We see that DCI Peter Jay (played by Daniel Mays in Des) knows Brian is getting all this gold dust, so a great triangle develops. They both eventually realise that Nilsen is controlling and manipulating them. Speaking to Brian Masters was an opportunity of course for Nilsen to fulfil his sort of grandiose psychopathic self-aggrandisement by telling his life story. Nilsen wrote down 52 exercise books worth of material which he gave to Brian.”

Des on ITV: Jason Watkins on what he remembers of the Dennis Nilsen case from the 1980s?

“I remember the growing horror over the sheer number of people Nilsen killed," says Watkins. “I was at drama school just after it happened and actually lived in a flat a few hundred yards from the office where Nilsen worked, so it was unnerving.”

Des on ITV: Jason Watkins on how the gruesome Dennis Nilsen case was covered in the 1980s

“Homophobia played a part in how case was covered and I think that was what first piqued Brian’s interest. He was appalled at the way that certain elements of the press had inferred that somehow the dysfunctionality of the murders was somehow akin to the perceived dysfunctionality of being homosexual back then, and in that time of the early 1980s that seemed to be a very prevalent thing. This appalled him and it was one of the things he probably wanted to redress as he dived into the prospect of interviewing Nilsen. Also, he was just like everyone else in that he was amazed at the way this person could do such things, plus he had a growing horror as more details of the case unfolded on TV.”

Last year Jason Watkins starred in Season 3 of blockbuster royal drama The Crown on Netflix. He played the Queen’s first Labour Prime Minister Harold Wilson in the 1960s. Her Majesty, played by Olivia Colman, was wary of Wilson at first, believing whispers that he could be a Soviet spy. But when these rumours were later debunked she apologised for her doubts and the two actually became great friends, and Harold Wilson is thought to have been one of her favourite Prime Minister’s ever on a personal level.

Back in 2016, Jason Watkins won plaudits and many awards for his amazing performance in ITV drama The Lost Honour of Christopher Jefferies, which can now be watched worldwide on streaming service Britbox. Based on the true story of the 2010 murder of landscape gardener Joanna Yeates, Watkins played Christopher Jefferies, a rather eccentric retired academic and landlord in Bristol who ended up wrongly accused of killing his tenant Joanna Yeates. He was later acquitted and the real killer Vincent Tabak was caught. Then Jefferies successfully sued all newspapers that had branded him the likely murderer.

Many fans of supernatural dramas will also know Jason Watkins for playing vile vampire leader Herrick in the BBC series Being Human, from 2009 to 2011, which can currently be seen on Britbox. The show about werewolves, ghosts and vampires also starred Russell Tovey, Aidan Turner and Lenora Crichlow.

When and where can you watch Des with Jason Watkins playing Brian Masters?

Des will be on ITV in Britain on three consecutive nights from September 14 to 16 at 9pm and should be available worldwide later in the year on streaming service Britbox. It also stars David Tennant as serial killer Dennis Nilsen and White Lines star Daniel Mays as detective Peter Jay.